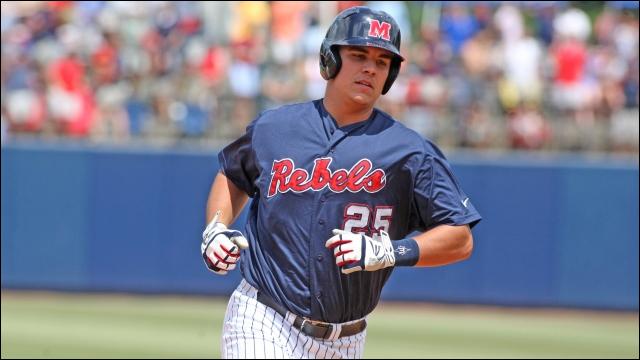 When college athletes make huge jumps from one season to the next, it oftentimes catches fans off-guard. That’s because they don’t see what happens in the weight room, the indoor facilities and the practice field. The only ones that see it coming are the players, trainers and the coaches and if you listen closely to them talking, you can pick up which player is the talk of the offseason. This year, the player on everyone’s minds is sophomore third baseman Colby Bortles.

Bortles tore the cover off the ball all fall, leading the team in home runs in the scrimmages. He is the Rebels’ top power source from the right side of the plate and if he can continue to stroke like he was in scrimmages, Ole Miss will have a murderers row in the heart of the order with J.B. Woodman, Sikes Orvis, Joe Wainhouse and Bortles.

Last season, the Oviedo, Florida native showed glimpses of his capabilities: hitting .250 with two home runs, two doubles, a triple and 14 RBI. He spent much of his time at first base and designated hitter as he sat behind incumbent Austin Anderson. The 6’5, 245 Lb. slugger showed a keen eye at the plate, drawing 11 walks and taking four HBP to give him a solid .386 OBP.

No matter which current or former player you talk to, Bortles’ name is consistently coming out of their mouth whenever the new baseballs are brought up. A lot of the flyballs he hit last season are going to carry out of the ballpark as the extra 20-25 feet can make a huge difference. If he can play this spring like he played all fall and can continue to see a lot of pitches, and drive the ones over the plate, Bortles will go from “Blake’s little brother” to the “Sultan of Swayze” in no time.