If you listen closely and open the doors of your mind and imagination when you walk through the doors of the Burns-Belfry Museum & Multicultural Center, you can step back in time to the year 1869 and almost hear the sounds of the people of “Freedmen Town” as they construct a small white frame building that soon would become the first African American church organized by former slaves in Oxford. 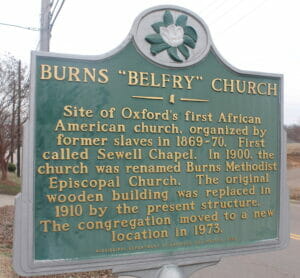 The cries of encouragement that must surely have filled the air as they erected their sanctuary of worship and the triumphant sighs of a job well done still linger within the building as you sit down on one of the original wooden pews where members sat over 140 years before. The feeling is strong and wonderfully mesmerizing.

The small wooden structure was replaced in 1910 with the current brick building that sits at 710 Jackson Avenue East and reminds us all of the faith, strength and spirit of people who may be long ago deceased, but whose presence of courage will never diminish.

Cynthia Parham is president of the Oxford Development Association and on the board of the Oxford-Lafayette County Heritage Foundation. Parham said the church played a leading role in the lives of African Americans in Oxford, especially in 1910 and many years afterward.

“This is such an important place to everyone,” Parham said. “It was in 1910 and it still is today. You can’t know where you’re going, until you know where you’ve been. And the Burns-Belfry Museum does a diligent job of telling yesterday’s story as well as tomorrow’s dreams.”

Parham said when the Burns United Methodist Church began to grow and needed a bigger church; it split off from the Jackson Avenue location in 1974 and moved. The building was then sold to a local attorney and businessman in 1978. It was sold again a few years later and renamed “The Belfry” and used mainly as office space. 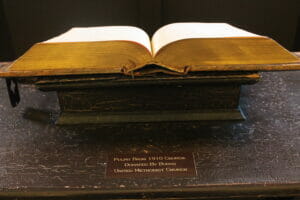 Author John Grisham was the last owner and when he moved away, Parham said the building sat vacant for a long time and fell into disrepair.

“Susie Marshall, an educator in Lafayette County for many years, was president of the Oxford Development Association at the time and she wrote Grisham a letter,” Parham said, “basically saying that the Association needed a home and asking him would he consider giving them the property. But the Association didn’t have the credentials that were needed then. So, Mrs. Patricia Young of Oxford, who was a member of the Oxford-Lafayette County Heritage Foundation then, came together with Mrs. Marshall and the Oxford Development Association, and the two groups began the process of acquiring the building for restoration.” 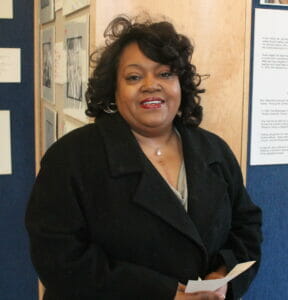 Parham said that after both groups began working closely together, Grisham deeded the building to the Oxford-Lafayette County Heritage Foundation because he believed in their mission of preservation and did not want the building to go to someone who might destroy it.

“Around $400,000 of the costs for Phase 1 was raised through federal and state grants as well as local contributions,” Parham said. “It was around $500,000 for Phases 2 and 3 and we received that also from government grants along with a contribution from the City of Oxford. We’ve gone through these phases, but that’s not to say that we don’t need more. We had our dedication ceremony for the completion of Phases 1 through 3 in 2013 and it was lovely and what you see here today is a beautiful building that has been restored from a building that was in horrible disrepair. But we have so much more that needs to be done.” 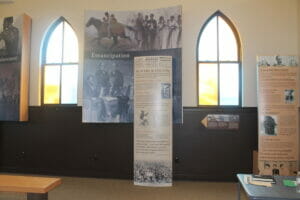 The museum itself is filled with historical information about the early struggles of the African American community and wonderful biographies of the driving forces behind the preservation of Burns-Belfry; such as Susie Marshall and Patricia Brown Young. Along with some of the original pews from the early church; the museum also houses the actual pulpit from the 1910 sanctuary, donated by Burns United Methodist Church.

“What we have today is not the culmination of what the museum will be someday,” Parham said. “And that’s why we encourage people to come in and see it because we still need donations. Our community has always been strong in getting things done, the African American community, the White community; everybody came together to make this something that people can enjoy. Ultimately, there will be kiosks with histories loaded into them, oral histories and many other additions that we want to make. That’s why we need to get people involved and for them to come and see what we’re doing here, because this is not just about some people, this is about an entire community coming together and loving each other enough to make more improvements.” 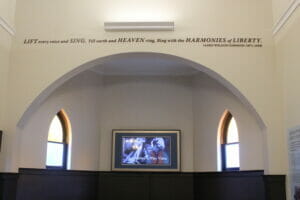 Along with Parham, Burns-Belfry has a team of professionals that work hard and are dedicated to the preservation of the museum for future generations.

“We have a director of planning, Darlene Copp,” Parham said, “and Darlene is wonderful at what she does. Jim Pryor has been over this project and he is absolutely fantastic. No one person has done one thing; it’s been a group effort. We also have an events coordinator who is doing a great job, Gina Matthews, who books the building for events, such as weddings and receptions. You can call her at 662-801-1427 or email gina@oxfordms.net for more information on event scheduling.”

The museum is opened Wednesday through Friday from noon until 3 p.m. and on Sunday from 1 to 4 p.m.