In a few days, I will be making another research trip to Lake Placid for more research on life lessons we can all take from the Miracle on Ice of 35 winters ago.

I was talking with Herb Brooks’ daughter Kelly recently. Married with three children now, she was just 9 when Herb’s boys stunned the Soviet dynasty team 4-3 that Friday night of February 22nd, 1980.

Here is an adorable picture of Kelly and her mother Patti from Lake Placid.

When Team USA won the game, the place went totally nuts. The waving of giant USA flags, the hugging, the crying, the players and assistant coach on the ice.

And then there was that ABC TV shot of Herb darting away. He never went out on the ice. He dashed straight for the locker room because:

A) He didn’t think it would be right to be all lovey dovey with the players out there after he had pushed them so hard for 7 months.

and….C) Kelly told me, laughing, he also REALLY had to go to the bathroom!

She said one vivid memory she had of being a 9 year old there was of standing in the hallway where the locker rooms were located. Soviet military leaders and political figures berated the Soviet players right there in the hall. At that young age she thought just coaches did that, and it was startling to see.

Sunday night, Emmy Award winning producer Jonathan Hock’s documentary “Of Miracles and Men” debuted on ESPN. His research revealed that the night before the Friday USA vs USSR showdown, the Soviet women’s figure skater won gold. A party was held in the Olympic Village (which would be turned into a jail after the games) and she wanted the vaunted Soviet hockey players there. Hock says they stayed up most the night and the champagne flowed.

The Soviet players were so confident that they would beat the U.S. that they probably figured being tired wouldn’t matter. The U.S. kids were college students and amateurs (Mike Eruzione was a 25 year old bridge painter). The Soviet team had defeated them 10-3 in an exhibition just two weeks earlier.

It is ironic that they would do something like that which would impact their performance and conditioning the next night ecause they were known as the best conditioned team in all of sports, training 11 months a year, up to 4 times a day. Their drills would start at 7 in the morning as for an hour they would throw boulders to each other, and then in the lake. They had to retrieve their boulders from the bottom. They did jump rope pushups and their cardio was so intense their heartbeat got up to 250 beats a minute. At times they urinated blood. 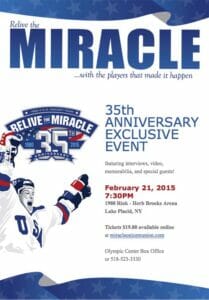 Lake Placid, which is one of the most beautiful places I have ever seen (like Switzerland in the U.S.) is celebrating later this month the 35th anniversary of the event that galvanized America and helped us overcome the downtrodden 1970’s.

Notice the clever marketing move in the flyer above, how tickets for the reunion event are $19 and 80 cents.

The main street in the charming village of Lake Placid that Friday night was a sight to behold, as thousands cheered and waved U.S. flags.

Jamie Farr, Klinger from MASH, was there in Lake Placid. He was a boy in Toledo, Ohio as a 10 year old in 1945 when America won the war. He said the celebration on the streets of Lake Placid was the only thing ever that was like VE day.

This is how all Gannett newspapers ran their lead stories:

“LAKE PLACID, N.Y. – “It was New Year’s Eve in Times Square, the end of World War II and the New York Mets winning the ’69 pennant all rolled into one huge roar as the United States Cinderella Olympic hockey team beat the mighty Russians here last night, 4-3.”

Radio City Music Hall in New York City had a 2 pm musical of Snow White and the Seven Dwarfs. A capacity of 6000 was expected and they poured in from their homes after watching the game. Snow White didn’t start until 2:30 because for 30 minutes the symphony orchestra played patriotic songs and the audience sang along.

In Winthrop, Massachusetts, where all those Eruzione families lived in the tri level house, hundreds showed up to start an impromptu celebration. An elderly couple from nearby Boston had heard on TV Eruzione was from Winthrop. They got on a city bus and got off at a stop a mile from the Eruzione home, walked there, and went in and sat down. It was like the 3 Wise Men trying to find the manger. They just had to be there.

Al Michaels is now pushing 70. He has called every major sporting event there is, from Super Bowls to World Series to Triple Crown races, and he says to this day NEVER has the National Anthem been sung with such passion and pride as when that American flag rose above the USSR and Finland flag, and those 11,000 people in the 7,700 seat arena sang as the U.S. boys stood boldly on the ice. 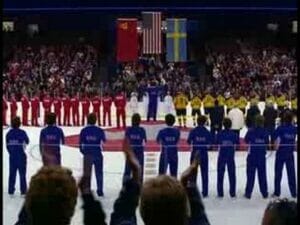 At the awarding of medals,. Lord Killinan – gotta love that name – of Ireland was the International Olympic Committee President and he put them over their necks. Jack O’Callahan would later be ‘scolded’ by his dad for forgetting to put his teeth in for the ceremony! The players were so giddy that some put their medals in their mouths after Lord gave them to them, and took a playful chomp.

“We may be young be we are immature,” Eruzione would always joke.

The celebration poured into the afternoon. The team would fly to the White House the next morning on Air Force One to meet the President. The players called their families from the plane, saying the White House kitchen had called them to ask meal they would like upon arrival. “Lobsters!” was a popular answer!

When they arrived in the nation’s capital, the magnitude of what they had done started to hit them. Thousands of people lined the streets waving flags as they were driven from the air strip.

They had restored pride in America. They showed that we can dream big dreams again.

Jim Craig would later say it was as if they had plunged a syringe full of adrenaline into the arm of a happy nation.

They had shown with an old fashioned work ethic, a total commitment to team, and a love for another that a group with as diverse a background as they had could do anything!

Jack Luther today is the CEO of Dunkin Donuts. Back then he did not have the prestige or lofty title, but he was a man back on track. “That moment when we won gold….I was confident the future of the U.S. was secured!”

Later, USA Today would write this: 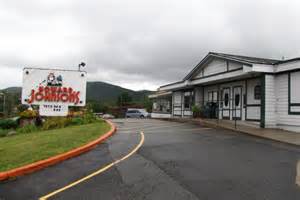 “Do you ever notice how the “where were you when that happened” question is most often asked of infamous circumstances? The Kennedy assassination. The Challenger explosion. The OJ verdict. 9/11. The deaths of Elvis, Michael Jackson or John Lennon. Great feats can be collectively shared (like the moon landing) but we tend to bond over the tragedies. But ask anyone of a certain age and they’ll tell you exactly where they were when they heard Team USA stunned the Soviet Union in the Olympic hockey semifinal. No sporting event in American history united the country more than the Miracle on Ice. No sporting event ever will again.” USA Today

There are so many life lessons from what they did, and from the incredible history of Lake Placid. If you ever have a chance to go there, I hope you can as there is a spirit there that is inspiring.

Plus, one of just two remaining Howard Johnson’s are there!