Vassallo: Life Is Stranger Than Fiction

The Joy of Trivia written by Bernie Smith is a fascinating book. Things we often take for granted or never knew continue to fascinate me.

For example, the word newspaper originated from the points of the compass. Here are several others taken from Mr. Smith’s book that caught my attention. 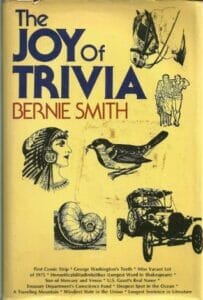 We could go on and on indefinitely, but we all get the picture. The old saying that truth is stranger than fiction could never be more accurate.