Last year was big for the restaurant business in Oxford. According to Liz Barrett Foster, editor of EatingOxford.com, 22 restaurants jumped into the relentless competition for diners, while six closed their doors after failing to succeed.

The owner of one restaurant launched last year welcomes the challenge.

“Competition is the fuel that makes us do better everyday. If you fear competition your best bet is to get a desk job, punch a clock and get home by five for the news,” said Clint Boutwell, owner of FINS on the Square.

Oxford’s Square is a popular location for restaurants, but rents are high, so some choose to build elsewhere. Foster says wherever you open up, you need to get the word out.

“Restaurant owners need to realize that Oxford has some 100 restaurants. If they expect locals to know they exist, they have to make the effort to get the word out. Whether it’s through advertising, social media, participating in local events, etc.,” she said.

Boutwell also owns The Oxford Grillhouse, and he recently added Mr. Phat’s Sushi & Wok, a new Asian food concept attached to FINS. He attributes much of his success to being on the Square.

“Pay rates are higher on the Square than anywhere else in Oxford. The Square has the most success for independent owners vs. national chains in other parts of town.”

Flaschka says the fact that the Square is so visible and attractive to out-of-towers makes locating there a plus. 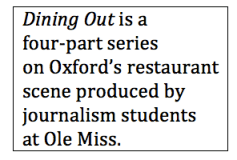 “I think in the long run it’s an asset to be there,” said Flaschka. “I think that they can charge a premium and people will always go there.”

Though Flaschka and Foster have slightly different views of the impact of the Square, they both agree that success is about more than location.

“I think that aspiring restaurateurs in Oxford have been led to believe that they cannot be successful unless they are on the Square. A business that’s run poorly will fail no matter where it’s located.”

Oxford diners will be able to check out Flaschka’s and Foster’s theories in at least two restaurants this coming year. Second Line, a Memphis eatery known for its New Orleans style cuisine, is expected to open on the Square by May 2015. On West Jackson, the restaurant chain Mugshots could open as early as this summer.