You can’t beat football for bringing in business to an Oxford bar or restaurant, but this year basketball is turning into a big winner, too.

John Allgood, the restaurant manager of Old Venice on the Square said, “Last year was a good year, we’re on track to do as good as – if not hopefully a little better — than last year.”

According to the weekly sales report for Old Venice, the restaurant made more than $34,000 during the first week of February last year. For the same week this year, sales topped $42,000. 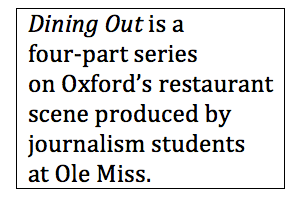 Ole Miss student Kayley Blackwell is a big sports fan. She was eating out at Proud Larry’s after a game recently and talking about her sense that there is more interest now in the teams.

“Ole Miss basketball games have drawn a fairly good amount of people. The girls’ team is improving thanks to the help of new head coach, Coach Matt Insell, which I believe will draw bigger crowds in the future. The men’s basketball team, with the help of Coach Kennedy, has always drawn a decent crowd, but the biggest sell out games are SEC games,” said Blackwell.

She pointed out that the Ole Miss vs. Arkansas game on Valentine’s Day was a sell out. Still, both Turan and Allgood say the busiest and most lucrative time of the year for the restaurant and bar business has to be football. Allgood says the football home opener brought in about $48,000 at Ole Venice, for example.

Blackwell has a theory about why basketball profits aren’t bigger.

“Mostly everyone that travels to the basketball games is either from Oxford or the surrounding area or are parents and family of the basketball players. People from all over travel to Oxford on a Friday after work to tailgate and go to the football game on Saturday,” she said.

Both Allgood and Turan stated that the reason basketball season is bigger this year than last year is a combination of a larger student population and how well the men’s basketball team has done, so far.

March 7 the men have a home game against Vanderbilt. Local restaurant owners will likely be hoping for a win on the court and off.

Story contributed by Hannah Vines, an art major at the University of Mississippi.  She can be reached at hbvines@go.olemiss.edu.