World-Renowned Antiquities Exhibit can be Found at UM Museum 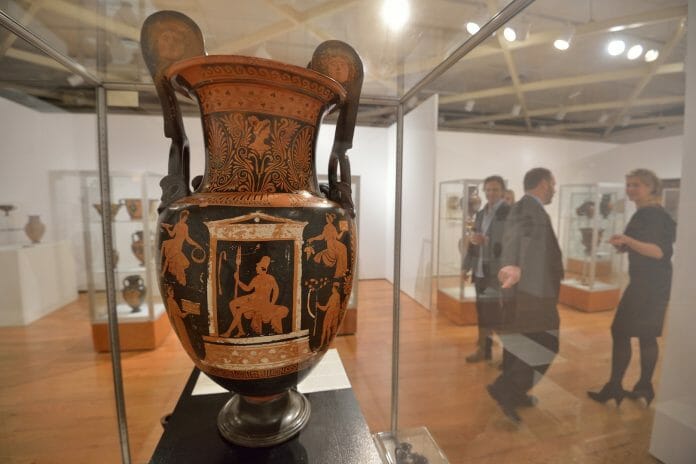 The city of Oxford plays host to a plethora of fine arts. Aspiring and accomplished authors come from all over in search of inspiration in the land William Faulkner called home. For decades, musicians of all kinds perform at venues on and off campus, in intimate yet awe-inspiring settings that only Oxford can provide. Another type of art you can find is at the University of Mississippi Museum where beautiful paintings, sculptures and other creations are on display, most notably the world-renowned antiquities exhibit.

Thanks to contributions from 20th century archaeologist Dr. David M. Robinson and Marge Peddle, the museum holds over 2,000 total artifacts dating as far back as 2300 B.C. Recognized as one of the finest in the nation as well as the largest in the South, the exhibit has been studied by many that wish to gain insight into the eras the artifacts come from. Project Manager Melanie J. Munns said while many exhibits showcase wars and monarchies, their goal is to show museum patrons the life of the everyday man and woman.

“We want modern people to be able to relate to the ancient people by helping humanize them,” she said. “We really want to ‘paint a picture.'”

On Feb. 20, the museum hosted the Buie Bacchanalia, a Greek-themed event in the old, vacant Mary Buie section of the museum where they are hoping to expand the exhibit. A total of 85 people attended the event for $150 apiece in hopes of raising not only money, but awareness of what needs to be done.

“It was great, we had live art, Greek dancers and Greek music,” said Membership, Events, & Communications Coordinator Rebecca Phillips. “Everything went so smoothly and we’re still riding the high of the event.”

While over 2,000 artifacts are in their possession, only 134 antiquities are currently on display. The museum hopes to raise $400,000 for the exhibit with the first $100,000 going to casework and getting mounts and panels for the pieces. Funds will also go to label texts, display graphics, digitizing the pieces as well as having them professionally cleaned and conserved. In addition to writing grants and speaking with private donors, Munns and Phillips will have a booth at the upcoming Memphis Greek Festival in May hoping to raise awareness.

“We’re working with a lot of Greek-Americans, researchers and supporters of the classics,” said Munns. “Not a lot of people know it but we have an internationally known exhibit here and I think it’s Oxford’s best-kept secret.”