“What Mama thought was the worst thing that ever happened to her turned into the best thing that ever happened to her,” said Bobby Mahoney, president of Mary Mahoney’s Old French House Restaurant. The “best thing” is the seafood restaurant, the Old French House, that Mary Mahoney (1924–1985) founded in 1964 across the beach highway from the Gulf of Mexico in Biloxi, Mississippi.

Her life story begins nearly four decades before the “worst thing” inspired Mary’s vision for a gathering place with panache, liquor that flowed despite “a blue law that was ignored in Harrison County” and food, required by “the city fathers” to go along with the spirits. Bobby recalled, “Mama wasn’t a great cook, but she was a hell of an eater. She knew what good food was about.”

Mary Cvitanovich was born in 1924 to Croatian immigrant parents in Biloxi. Her father, a commercial shrimper, amassed a fleet of 12 shrimp boats and founded a sea- food factory, the Sanitary Fish and Oyster Co., later Southern Seafood. Her mother operated a grocery store that supplied shrimpers.

Mary went to elementary school at St. Michael’s on the Point and continued at Sacred Heart Academy, flourishing from the encouragement and advice of her mentor, Father Herbert Mullin, pastor of St. Michael’s Catholic Church.

“The biggest break my mother got in her life was being around the smartest guy in town. You know who that was?” said Bobby. “The parish priest. You know what Father Mullin told her to do when she was about14? Go to the newsstand on Tuesdays and get the Sunday New York Times. She just read the magazine section, learning about fashion, music, food and art, probably in that order.” All four interests would manifest in her entrepreneurial pursuits.

In 1945 Mary married Robert “Bob” Mahoney, the Irish “Yankee airman” she met at Keesler Air Force Base in Biloxi, where she worked in a clerical position. In 1951 the new owner of the Tivoli Hotel on Biloxi’s East Beach recruited Bob as manager, offering an oral lease on the hotel lounge. Mary was soon running the lounge, engaging customers with her personality, political common sense and imaginative marketing. “She would dress in outlandish costumes and have theme parties, like the birthday party for Giacomo Puccini where she played Puccini operas all night,” said Bobby. “She would also trade beer for talent—to artists for paintings and musicians for playing the piano in her classy little lounge.” Mary had found her niche. 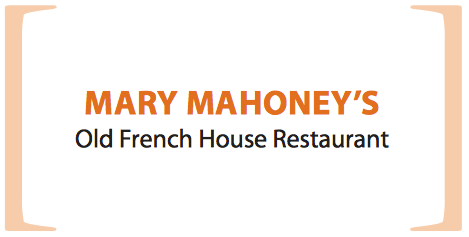 In 1961, however, the Tivoli changed hands again, and the new owner had no truck with the “oral lease.” When the determined Mary dug in, he cut off the water and electricity. Customers who lived on the hotel’s second floor responded by dropping extension cords to the lounge, and Mary put up a sign, “Welcome to West Berlin.” The feud raged in newspapers, all the way to New Orleans. When the barricades went up, Mary called on the sheriff, “who had more power in Harrison county than the President,” accord- ing to Bobby. “The sheriff said to the new owner, ‘You let Mary stay until after Labor Day, and she’ll go peacefully.’“

Losing the lounge was “the worst thing” for Mary. Then she noticed that the “Old French House,” built around 1737, was for sale. Unfortunately, she was “backstabbed by a friend who told two brothers that Mary was getting ready to buy this house,” said Bobby, “and they put a deposit on the property.” Mary was heartbroken, but within a year the buyers’ plans fizzled, and they sought a quick exit. Mary and her brother, Andrew Cvitanovich, became partners and in 1962 assumed the house note, paying approximately 12,000 for the house.

It took determination and two years to open the doors of Mary Mahoney’s Old French House Restaurant. After convincing the Biloxi City Council to rezone the property from residential to commercial, Andrew sold his shrimp boat for working capital and led renovation of the house into a bar and restaurant. Mary scoured flea markets and junk shops for tables, chairs, dishes, flatware and kitchen equipment. Family members and friends helped. On May 7, 1964 Mary Mahoney, dressed in an evening gown, her trademark hostessing attire, tended bar and seated the first of thousands of guests who still gravitate in droves to “the best thing” that she made happen.

Has Mary Mahoney’s changed? Mother gerrymandered this property, adding a courtyard, building a sunroom and another dining room in the parking lot, expanding the kitchen.

How many people can you seat? Four hundred people, but the secret to restaurant business is not how many people you can seat but how many your kitchen can feed at one time.

What about employees? Mother was smart enough to surround herself with people who knew about the food industry. She loved her employees. About 90 people work here now.

What were Mary’s entrepreneurial traits? You know what vision is? It’s seeing something that’s not there. Mother had a lot of vision. Desire drove her, and she had determination. Her talent was her personality. She loved her customers, and would go from table to table and talk to people.

How about competition? She concentrated on her business and never worried what was going on down the street.

What was Mary’s educational path? She studied business courses for a year at Perkinston Agricultural High School. She wasn’t an intellectual, but she had a doctorate in social endeavors. Father Mullin recalled in a speech that “helping Mary with her homework was a bit of an ordeal” and that she was the only person he ever heard use a triple negative and still make sense. He told parents of children with similar problems not to despair: “They might grow up to become as successful as Mary Mahoney.”

What was Hurricane Katrina’s impact? Waves came through second floor windows. I had a three-and-a-half-inch piece of glass in my gluteus maximus, the wound duct-taped during the storm, and my brother-in-law was bitten by a copperhead. It took just 55 days and half-a-million dollars to re-open. We’ve never had insurance, so used equity and money in the bank.

Was it hard to pick up the reins from Mary? I walked behind mother for 22 years, and knew how she operated. My sister is active in the business with her son and daughter. So are my son and two daughters, my uncle and his children.

Do recessions and storms hurt the business? We call a hurricane a “disastrous opportunity.” The hotels right here buffer recessions.

How about revenues? Opening night Mama had to borrow money to put in the cash register. Annual revenues are around 4 million now.

Mary knew politicians and celebrities. She worked to elect Jack Kennedy our President, and my parents went to a Kennedy inaugural ball. In 1979 the Carters invited her to a welcome for His Holiness John Paul II. She served crab claws and soft-shelled crabs for Ronald Reagan in 1984 on the White House lawn. She loved being an ambassador for Mississippi and the Coast, changing perceptions of Mississippians.

She was also recognized for her business leadership. In 1982 she was named Mississippi’s “Small Business Person of the Year.” In 1985 the Biloxi Chamber of Commerce elected her its first woman president.

What advice would she offer young entrepreneurs? She said she hoped “to be an inspiration to a lot of young people who do not have the knowledge, but do have the desire. Sometimes desire can be a lot more important than anything else.”