Women and business have been holding hands in the professional sense for quite some time now. Entrepreneurs in the 21st century know no gender and their determination no he or she differentiation. Groundbreaking success comes to all who are willing to work hard and believe in their dreams. 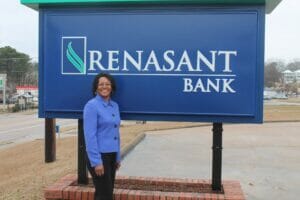 Helean Davis is one woman who isn’t afraid of hard work; never has been and never will be. Davis is the branch manager of Renasant Bank in the Oxford Tradewinds Shopping Center. She started working for the bank in 1996 as a drive-thru teller when they were Merchants & Farmers. In 1998 she moved up to frontline cashier and in 1999 was promoted to lead teller at the West Jackson office while it was still under the M&F umbrella. In 2002, the bank moved her back to the University Ave. location, where she remained lead teller until 2010, when she was promoted to branch manager. When Renasant bought the bank in 2013, they retained Davis as branch manager, per her performance and experience, and she still serves her customers in that capacity today.

“I love people and customer service,” Davis said. “I enjoy making people happy and supplying whatever they need to make their lives simpler. I love what I do because it allows me to have that one-on-one connection with our customers.”

Davis has always been achiever. Her first job was as salad bar attendant at Danver’s restaurant when she was only 15-years-old. At that time, the company was owned by three brothers from Memphis and she worked for them for 10 years, climbing her way up the professional ladder with tenacity and dedication, going from salad bar attendant to head drive-thru associate to head cashier, and ultimately, into management in the Shoney’s/Captain D’s/Long John Silver’s realm of the company, becoming front end manager of Captain D’s at 19-years-old. An age that some might comment was much too young for such major responsibility. But Davis reveled in it.

“I was over the entire front end of the business,” she said. “It was a challenge that I enjoyed greatly.”

After her time in food management, Davis went into the retail management ring, working for Shoe City until the business closed, after which she joined Circus World toy store in the Oxford Mall and stayed there until they too closed their doors.

“Being in sales for most of my adult life, I totally changed my direction when I went to work in a factory after Circus World closed,” Davis said. “It was different, but I was determined to do it. After that though, I found my real niche. My next step after my dive into factory work was the bank and I’ve been here ever since.” 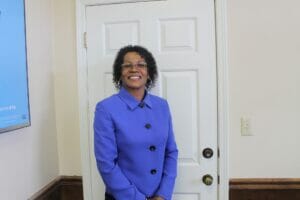 Davis is an Oxford native and was raised in the College Hill community, graduating from Oxford High School. She is married with four children: three sons and a daughter.

Davis has also owned her own commercial and residential cleaning service, Neater than a Pen, for 22 years, juggling her own business around her other jobs. Plus, about five months ago, she and her husband Brian started their own catering company called Davis Delight.

Davis said her advice to any woman out there wanting to stretch her wings a bit and either start her own business or begin a professional career would be to believe in your dreams.

“Find something you’re good at and that you love,” Davis said, “and then your job won’t seem like work at all. People sometimes think it’s odd that I like to clean, but I love it; I find joy in putting things in order. So, find something you love to do, believe in your dreams and have faith, and then give your customers 100%, because it’s all about them and the service you provide.”