Each year, hundreds of people attend the Oxford Film Festival to watch new films, meet the filmmakers and celebrate the experience with fellow film-lovers. Over the years, the film festival has premiered countless independent films and honored several well-known actors during its four day event. The festival has been a huge success with the Oxford community for over a decade. But this non-profit organization would not be possible without the hard work and dedication of executive director Molly Fergusson.

Fergusson helped found and organize the first ever Oxford Film Festival in 2003 and has played a large role in its growth over the years. With the help of the co-directors, Michelle Emanuel, Diala Chaney and Melanie Addington, she shaped the film festival into what it is today. Fergusson’s enthusiasm created one of Oxford’s most popular attractions, but her love for films began long before she moved here. 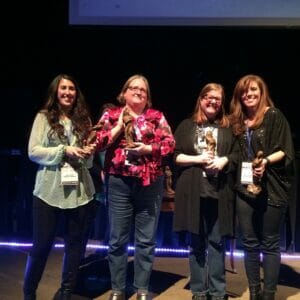 While attending college at Randolph-Macon Woman’s College in Lynchburg, Va., Fergusson studied abroad at the University of Edinburgh, Scotland. Over the holidays, her mother told her she was unable to visit. Since it was such short notice, Fergusson didn’t make any plans and was left in the dead city for about two weeks. She said everything was closed except for a cheese shop and a movie theater. That theater became her independent movie haven for the next few weeks. Fergusson said, “I would just walk down the hill every day and see whatever they were playing and that was kind of my thing.”

Since then, she has been completely absorbed in the world of television and cinema. Her movie-binging inspired her to stay up-to-date with new films and their stars. “I would always watch and read about what films are coming out and who was doing what,” said Fergusson. “That was my passion.” After college, she moved to Wilmington, N.C., where a full-service studio lot was recently built. There, she worked with an independent producer who managed smaller projects.

In 1998, she moved to Oxford where the film industry was not booming. “They would bring independent films to Memphis, but I was still reading about things that were going on and I couldn’t see it,” said Fergusson. “It was making me crazy.” 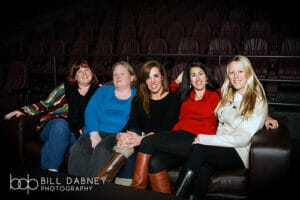 After finishing law school and getting a job teaching legal writing and contract drafting, she was still craving a role in the film business. The chair of the arts council at the time was a good friend of hers. Once he began tossing around the idea of a film festival in Oxford, Fergusson was all in.

The first annual film festival had a volunteer crew of about 30 people. Though the festival was a hit, getting 30 people to meet at the same time and agree on anything was chaos. Since then, they have reduced their number of year-round volunteers. The four regular volunteers now stay in constant contact, meeting at least once a month to plan what films should be played, who should judge, and who can make an appearance. Fergusson said, “It could be our full-time job if we let it.”

Unfortunately, the festival has now grown beyond what four year-round volunteers can manage. Although the festival will be under new management next year, the current committee will still hold emeritus roles.

The Oxford Film Festival has been a huge success for 12 consecutive years. Fergusson said she has made many friends and had a lot of fun since the festival’s opening in 2003, but she owes most of her gratitude to the people of Oxford. “If we didn’t have the educated and cultured audience that we have, we couldn’t pull it off,” Fergusson said. “Yes, we put in a lot of work, but we’re very lucky to be where we are.”

Facebook
Twitter
Pinterest
Previous articleBall: The Offense of Public Drunk and Other Stupid Things One Can Do In Life
Next articleBen Jones: A Mississippi Coaching Icon