Walter Ray Perkins was an outstanding running back at Petal High School, where he also played basketball, baseball and ran track. His high school nickname was “Grease” because he worked as an auto mechanic, opening a garage every morning before school and closing it most days after practice.

A fullback, he led Petal to an undefeated season in 1961 and then signed a scholarship with Bear Bryant and Alabama. After a serious head injury — one that required a steel plate — during his freshman season, Perkins moved to wide receiver and helped Alabama win national championships in 1964 and 1965.

Alabama won the SEC Championship in all three of Perkins’ varsity seasons and he set receiving records in both the Orange and Sugar Bowls. He was selected SEC Player of the Year in 1966 when Bama finished 11-0 but was bypassed for the national title.

He played five seasons in the NFL, catching Johnny Unitas’ and Earl Morrall’s passes for the Baltimore Colts and helping the Colts to two Super Bowls. Perkins became a coach and was head coach at his alma mater and also head coach of both the Tampa Bay Bucs and New York Giants. Most recently, Perkins overhauled the Jones Junior College football program, going 15-5 over two seasons. 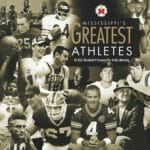