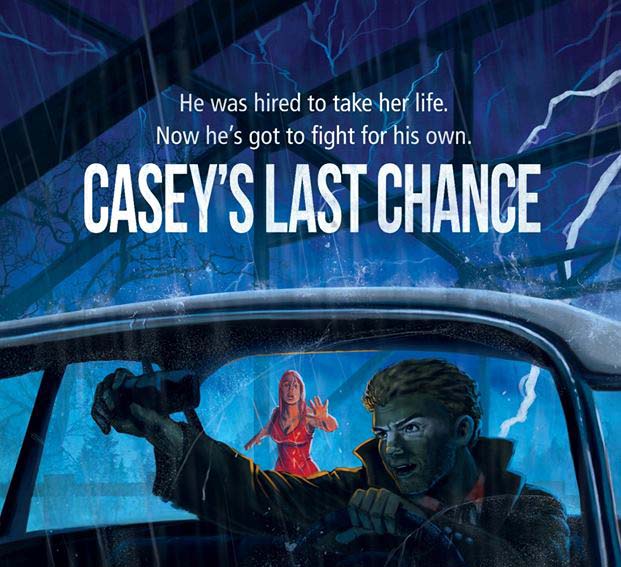 Meek School of Journalism and New Media professor Joseph B. Atkins authored yet another great read: Casey’s Last Chance, a hard-boiled Southern novel set in a humid July 1960 where temperatures seemed to be at all-time high in weather and people.

Casey’s Last Chance follows a North Carolina hustler, Casey Eubanks, into the underbelly of labor rights opposition while on the run for a reckless shooting death of his cousin during an argument with his beloved Orella. Casey goes from a hot pan into fire when he bails on a contract kill of a labor rights activist leader from a former Nazi, Max Duren, who has a shadowy network throughout South. With help from investigative freelance reporter Martin Wolfe and rogue FBI agent Hardy Breecher, Casey makes an U-turn and runs headfirst into an explosive confrontation.

The pressing story will whisk the reader from North Carolina to Tennessee to north Mississippi hills as the characters battle demons in the South and within themselves. The book released nearly two months ago but has garnered positive reviews thus far.

To Atkins this book is a continuance of a story that stuck with Atkins through “fits and starts” including some published short stories before his hard work paid off with its eventual publication. Casey and his girlfriend Orella were familiar characters, so familiar that the recently published book feels almost like a sequel.

Atkins said, “I’m like a lot of reporters who’ve had that manuscript in the bottom drawer while producing reams of non-fiction.”

Casey is a character loosely based off a black sheep of the Atkins family, a person who was constantly in trouble.

“…Shortly before he died he tried to come back home and find refuge with some of our relatives in central North Carolina,” Atkins said. “Nobody wanted to have anything to do with him. That real life story really impressed me, and it’s one of the seeds that grew into Casey’s Last Chance.”

The book also draws from Atkins’ stories he covered as an journalist with a special interest in working-class in America, especially the South. These stories are personal to him: “I come out of a blue-collar family, and I’ve focused much of my writing on the struggles and triumphs and culture of working-class folks. They’re my people.”

He has reported at length on the conflicts of working rights and the press in the South in his book: Covering for the Bosses: Labor and the Southern Press.

“The issues in Covering for the Bosses are part of the DNA of Casey’s Last Chance,” said Atkins, “a hard look at a race-and-class-torn South that’s ruled by a handful of people who don’t give up power easily.”

Veteran journalist and author Curtis Wilkie enjoyed the book: “Move over Greg Iles and make room for another novelist who traffics in treachery, wild rides, unreconstructed Nazis and rogue agents. In Casey’s Last Chance, Joseph B Atkins establishes for himself a place in the top ranks of Southern gothic storytellers, with a cast of evil characters and a few good men and women to fight them.”

Neil White, Oxonian author of In the Sanctuary of Outcasts said, “Joe Atkins has crafted an original, provocative take on the 1960s South. This story has it all – mobsters, assassinations, romance, gothic landscapes, and a cast of characters you’ll remember long after you’ve read the final sentence.”

The book is available wherever good literature is and can be found on Amazon. The eBook edition is also available.

Atkins’ work has appeared in Hardboiled and Alfred Hitchcock Mystery Magazine and his novella Crossed Roads placed as a finalist in the Pirate’s Alley Faulkner Awards in New Orleans. For those interested on Atkins’ work and musings he has a blog.