On Cooking Southern: Get Some Backbone and Shell a Few Peas 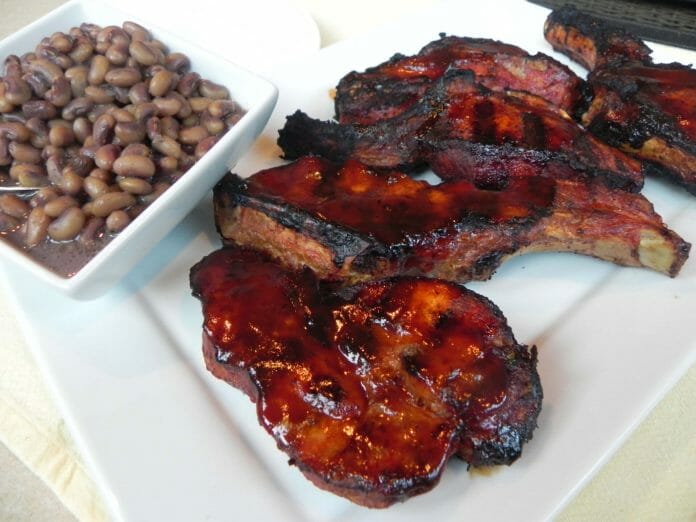 SOUTHERNISM OF THE WEEK
High on the hog: A state of living or behaving that implies conspicuous consumption, as in “Eula Mae sure is living high on the hog with her new SUV and timeshare in Destin.” This 20th century American expression, first printed in March 1920 in the New York Times, originally referred to inflation “caused” by uppity Southern workers’ preference for the better cuts of pork such as chops and tenderloin, rather than the lower cuts such as knuckles, ears and feet.

Everybody knows that Southerners are partial to pig and peas. We may have started consuming them out of necessity, but nowadays we prefer them. Nothing speaks to us more eloquently than ham or bacon or perfectly roasted, smoked or grilled cuts of pork embellished with dry rub and an occasional drizzle of barbecue sauce. Think pulled pork shoulder, tenderloin and ribs, or center-cut chops. My 40-year North Carolina experience turned me into a fan of what the Tar Heel nation calls pork backbone. Folks around here call the cut “country-style ribs.”

It only takes two or three country-style ribs to satisfy most hungry diners. That’s why this meaty and lean cut of pork is an excellent budget-extender.

They might more accurately be classified as a variation of pork chops. We all know what this means — they should be cooked low and slow, rather than flash-cooked like baby backs.

Serve up that pork with a side dish of fresh peas, a sliced field tomato and a slab of skillet cornbread or a pan of homemade biscuits, and most of us will say we are in hog heaven.

Speaking of peas, for the past few weeks some of us have been jockeying to hit the farmers’ markets as soon as they open. That’s what it takes to grab coveted bags of shelled purple hull peas before they disappear from the cooler. I would say something nasty about the unashamed li’l ol’ blue-hairs who show up at 6:50 a.m. on Saturdays to fill their go-to-market totes with as many quart baggies as their budgets will allow, but I’m now one of ‘em.

I’m not ashamed, either. I’m addicted.

I wasn’t always a big fan of purple hulls, or any pea for that matter, except those too-scarce tiny lady peas. I didn’t care that our Southern “cow” peas were brought to the region with African slaves, and became an essential foodstuff by default when left in the fields by ravaging Union troops who considered them cattle fodder. I certainly didn’t care that Southern peas of all types are rich in protein and other nutrients.

My father, the Memphis city boy with Arkansas roots, used to conspire with his Lake Village and Wynne buddies to bring home bushels and bushels of unshelled purple hulls and other peas when in season. Daddy loved peas.

My idle child hands were put to work hulling them so Mom could freeze them for future use. Therein lies the reason why I didn’t care for those peas: To a somewhat prissy child, an hour spent shelling peas seems like a lifetime, especially when it involves staining one’s fingers.

Time and life experience have a way of altering one’s attitude. Nowadays, I am delighted to expend that hour of energy freeing those peas from their pod cocoons. I am even more willing to pay extra to buy the peas already shelled and bagged.

But right now we’re in a pea lull, and Lafayette County purple-hull lovers will have to wait. We’re between crops, according to Aileen Bost of Bost Farms, the enterprise that runs the Mid-Town Farmers Market in Oxford.

When asked whether her family has any Crowder peas or black-eyed peas, Mrs. Bost shook her head. Everybody around here prefers the purple hulls because they have more flavor, she explained.

I visited Mrs. Bost’s field of peas this week just to check out the second crop of ripening purple hulls. They’re almost ready. She predicts they should start coming in by next weekend. The crop will produce for about two weeks.

Needless to say, my alarm clock is already set for 6:15 a.m.

COUNTRY STYLE RIBS (BACKBONE)
Less is more when seasoning this cut of pork, in my opinion. Kosher salt, pepper and a sprinkle of garlic powder are really all that’s needed for low-and-slow grilling at a temperature of 250-300˚. The backbones love being basted after about 20 minutes with a thin cider vinegar mop sauce. Turn them only once. Of course, feel free to use the traditional Memphis dry rub technique. Save the actual barbecue sauce for the last five minutes or when eating them. 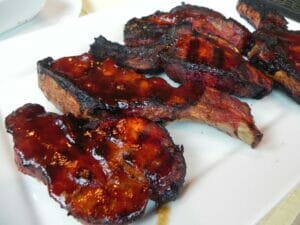 Thin traditional barbecue sauce with a small amount of cider vinegar until it is more watery than viscous. Rinse the meat and pat dry. Lightly season all sides with spices and optional dry rub. Allow to rest for about 30 minutes.

Place backbone over indirect flame on grill preheated to medium low. Cover and cook for about 20 minutes. (If cooking on medium to medium-high heat the meat will cook rapidly and tend to burn.)

Baste with thinned mop sauce and cover for 5 minutes. Flip meat, baste top, and cover again for 10-20 minutes. Cook longer if needed: Meat is ready when fork tender and pulling away from bone. Serve with heated barbecue sauce.

PURPLE HULL PEAS
Feel free to season with pork, bacon or vegetable broth, and serve with condiments of chopped onion or tomato chili sauce. A bowl of peas makes a terrific supper! 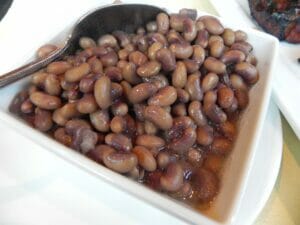 Fill a 3-quart saucepan half full of water. Bring to a boil and add the peas, bacon drippings and chopped pepper. Simmer until liquid reduces. Season with salt and pepper to taste and continue simmering until remaining liquid becomes a broth and peas are tender. Serve immediately. Refrigerate leftovers, if any, or use in homemade end-of-the-week vegetable soup.