On Cooking Southern: The Miracle That Is Salt 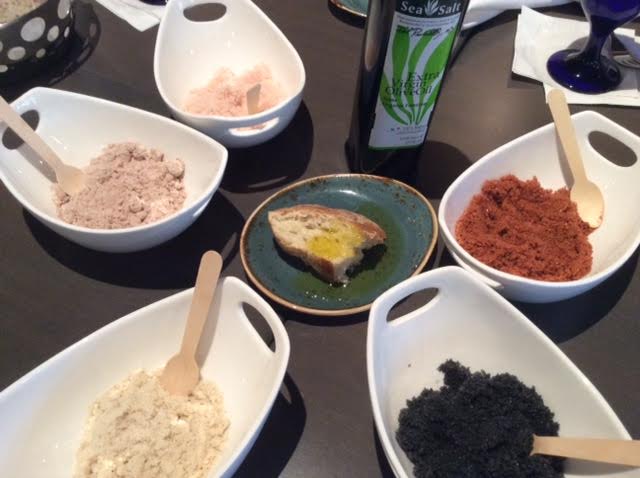 SOUTHERNISM OF THE WEEK
Flapdoodle: Making a bunch of something out of nothing… expression derived during the Civil War among Confederates referring to unseasoned cast iron skillets retaining caked-on “doodles” from flapjack pancakes.

SALT IS GOOD FOR YOU… IN MODERATION

We’ve all heard that Americans consume too much salt. Studies in recent years consistently show that Americans typically ingest about 3500 mg of salt daily, an amount considered by all experts to be too much.

But how much is too much?

The debate over dietary salt is one of the most contentious topics in the field of nutrition.

The U.S. Dietary Guidelines, produced by the U.S. Department of Agriculture (USDA) and the Department of Health and Human Services (HHS), have stated for years that the ideal amount of salt in one’s daily diet should not exceed 1500 to 2300 mg (the amount of sodium in 1 teaspoon of salt), depending on the individual’s levels of sweat-producing activity. In 2011, the minimum recommendation was revised downward to 1200 mg per day for inactive people.

According to a 2014 study published in the New England Journal of Medicine, the low levels of salt recommended by the government might be more harmful than helpful.

All experts tend to agree that too much salt consumption can be dangerous for people with high blood pressure. On the other hand, too little sodium in one’s diet may stimulate the production of renin, a hormone that may be harmful to blood vessels. Salt craving could be an indicator of zinc or magnesium deficiencies.

There’s nothing simple or straightforward that has come out of any of the numerous studies of world populations and societal consumption averages. The exact amount of salt our bodies need to function at peak form depends on age, exercise routine, genetics, weight and other factors. 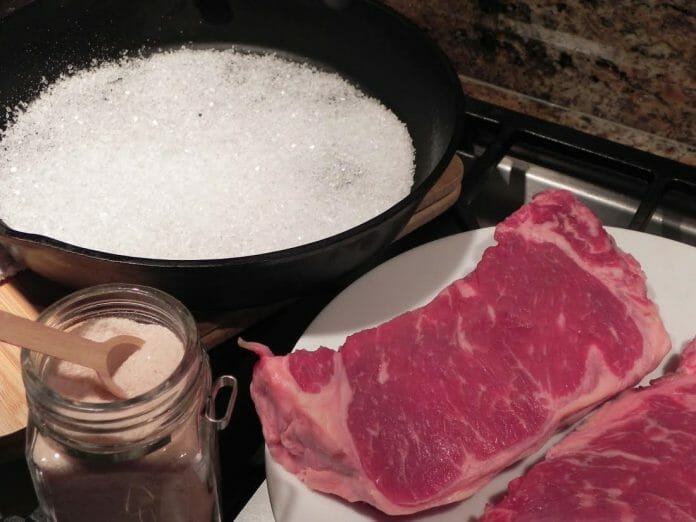 But consider this: Salt is necessary for survival. Salt aids blood sugar control by improving insulin sensitivity. Salt acts as a natural antihistamine (try sprinkling salt on your tongue at the start of an allergic reaction or asthma attack). Salt enables the body to maintain proper stomach pH – its sodium chloride balances the stomach’s hydrochloric acid.

Lack of adequate sodium in the diet can cause potassium, magnesium and calcium deficiencies.

Salt lowers adrenaline spikes. Salt improves sleep quality. So at bedtime, to avoid awakening with heart pounding, curb that late-night munchie attack with a pinch of salt and a drizzle of honey on the tongue.

Salt is a top notch antibacterial preservative, preventing bacterial growth and spoilage. That’s why we gargle with salt water for a sore throat, or soak wounds in purified salt water.

It serves as a binder in processed meats to reduce loss of meat during cooking, and it improves texture in everything from bread dough to cheeses. It helps control fermentation in pickling, helps with color development and color fastness, and as an aid in removing organic stains. And of course, a pinch of salt makes food taste better, adding a satiety factor that enables us to enjoy quality rather than quantities of food.

Within parameters of moderate consumption, salt is good for us. But not all salts are created equal. Regular processed table salt is better than no salt, but unrefined salt, rich in trace minerals and additive-free, is better.

So what exactly IS salt?

There are various types of salts. ALL of them are ionic compounds that result from the neutralization reaction between an acid and a base. They are composed of related numbers of positively charged ions called cations, that can be inorganic such as chloride, or organic such as acetate, or monatomic such as fluoride, or polyatomic such as sulfate.

Most mineral and inorganic pigments, and many synthetic organic dyes, are salts. Their color ranges through the color spectrum, dependent on the electronic structure for the actual hue.

The salt that we eat is a mineral composed of two elements – sodium, an elemental metal that explodes on contact with water, and chlorine, an element that is poisonous in gas form. Combined as sodium chloride, the two elements are transformed into a crystalline rock that dissolves in water. Sodium Chloride salt is found all over the world, in the earth’s landmasses and in seawater.

Earth salt is mined, and sea salt is harvested through filtration and evaporation. Salt never really is destroyed. It just changes form and location and remains a constant.

According to scientists, if the world’s salt were extracted and dried, it could cover the entire landmass to a depth of almost 500 feet.

Cooks are interested in three basic types of salt:

Table salt: Heavily refined, usually mined, heavily ground to remove most minerals and impurities, and containing anticaking preservatives and often containing iodine, an additive created in the United States to reduce the occurrence of goiters.

Kosher salt: Additive free coarse-grained salt developed in accordance with Jewish dietary laws to enable the salt crystals to draw blood out of meats. It is lighters and less dense than table salt.

Sea salt: Made from evaporated ocean or seawater, containing amounts of trace minerals such as potassium, iron and zinc. The darker the sea salt, the higher its concentration of impurities and trace nutrients.

Within these three categories, we find a multitude of salt classifications such as pickling salt, Celtic Salt, Himalayan Salt, Gos Sel, Fleur de Sel, French Sea Salt, Hawaiian Sea Salt, and large-crystal grinder salt. Any type of salt may be smoked to add flavor to the crystals.

Some chefs have become noted for their use of salts from different locales to achieve wildly appealing bursts of flavor in specialty dishes. Last month at the Association of Food Journalists conference in St. Petersburg, FL, conferees attended a salt tasting with Chef Fabrizio Aielli at his restaurant, aptly named Sea Salt. We experimented with white truffle salt (white sea salt infused with truffle flavoring), a sulfur-flavored kalamanak salt from India that pairs beautifully with shirred eggs or asparagus, red salt from Hawaii, black clay salt from Hawaii, and pink Himalayan salt. The flavors and the saltiness explosions on the tongue were different for each salt.

Chef Aielli gave us all a tip about salting our food. He recommended light use of salt during cooking just to bring out the ingredients’ natural flavors, with sparing salt-to-taste upon eating the finished dish.

In other words, like everything else in life that is potentially wonderful, less is more. 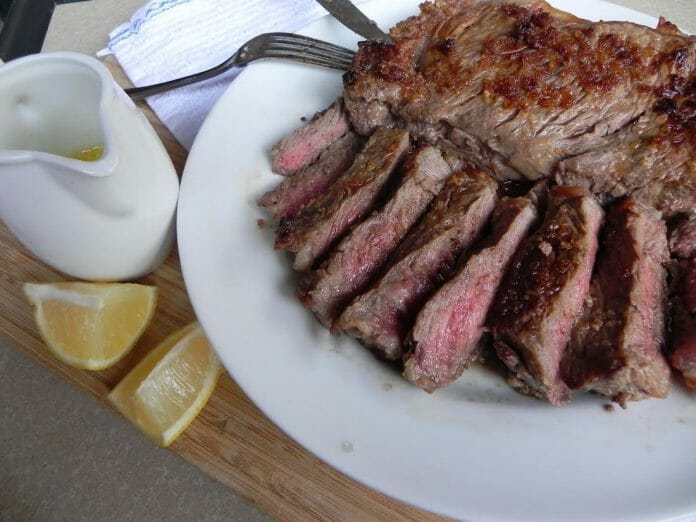 CAST IRON SKILLET STEAK
My father, the parent who taught me how to cook, was renowned among his cotton buddies for his cast iron skillet steaks. Heeding a favorite recipe from the great Craig Claiborne, the Sunflower, MS, native who wrote for the NY Times, Dad could knock out delectable crusty steaks within minutes for a hungry crowd. He used New York strips, which fit perfectly, two-to-the-skillet.

1. Use marbled cuts of steak such as ribeyes, NY strips, or flank steak. Avoid lean cuts.

2. Use steaks about 1-inch thick to promote even searing on both sides.

4. Bring steaks up to room temperature for 30 minutes after refrigeration.

5. Do not season the steaks with salt or pepper or garlic; no salt is needed; pepper and garlic will burn.

6. Never add cooking oil or butter to the cast iron skillet before searing.

7. Make sure the salted skillet reaches the very hot smoke-point stage before

8. Remember the cast iron skillet will continue to heat after removing from the burner.

Juice of half a lemon

While skillet is heating, melt butter and stir in the lemon juice. Set aside.

Carefully place steaks on the popping salt and set timer for 3 minutes. Flip the steaks. Set timer again for 3 minutes. Briefly cover the skillet with a lid (no more than a minute) after the second 3 minutes. Remove lid and test for doneness. Remember, steak temperatures will continue to rise five degrees after removal from heat.

Allow meat to rest for 5 minutes to seal in juices. To serve, drizzle with lemon butter and sprinkle with ground black pepper to taste. Pair with classic sides of a tossed green salad and baked potato.