Week 7 witnessed the Alabama Crimson Tide strengthen its position in the west with an 18 point drubbing of Texas A&M in College Station while LSU was handing the Florida Gators their first loss in Baton Rouge.

The November 7 showdown in Tuscaloosa with the Bengals could ultimately determine the western representative in Atlanta.

Georgia reinstated itself in the eastern race with a narrow victory over Missouri. Auburn won its fourth game of the season in Lexington; and South Carolina edged out Vanderbilt minus Steve Spurrier. Mississippi State is now 5-2 via a non-conference victory over LA Tech.

While all of the above was in motion, highly ranked Ole Miss was getting crushed in Memphis by the Memphis Tigers 37-24. This was one of the more costly defeats in Ole Miss history as you have to go all the way back to 1976 (and Memphis again) to find where a ranked Rebel team lost to a non-conference (unranked) opponent. 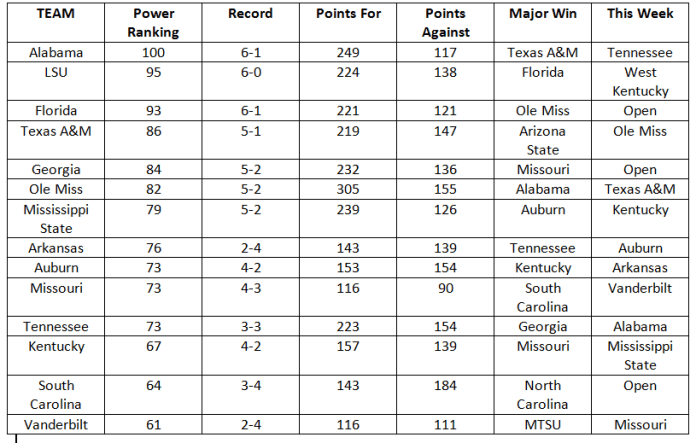 This week is elimination game time for Ole Miss and Texas A&M. Also the Auburn-Arkansas loser and the Kentucky-MSU loser can start making plans for a minor bowl. Missouri is also in a must win situation versus the Commodores. The top two teams (Alabama and LSU) have relatively easy games while No. 3 Florida is off.