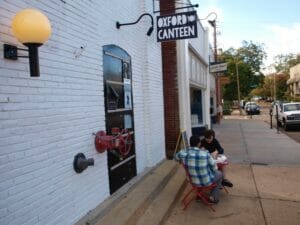 About five feet separate the twin brick walls is the Oxford Canteen. The unique Oxford restaurant is a self-described ‘food-truck without wheels’ and echoes the feel of shotgun homes in its layout. Stools and a bar dash the wall leading up to a window into the kitchen and mind of Corbin Evans, chef and owner. With a house menu of favorites and a twist of market-inspired daily specials, Canteen is a refreshing addition to the Oxford food-scene.

In 2013, Evans found himself in Oxford following a relocation from New Orleans. After working in the kitchen of an established restaurant in town, Evans took a job at the Ole Miss Inn.

The Oxford Canteen wasn’t a reality until he and Bradley Bishop, owner of The Lyric, came to the same conclusion about how to use storage space in the building.

“I was at his house. His girlfriend was friends with my wife,” Evans said. “We were watching basketball and eating tacos. Then afterwards, I said, ‘I wonder if Bradley has ever considered opening a restaurant in the Lyric?’ So we talked, and it came about five or six months later.”

In line with his creative space, Evans cooks food that is a bit different than the typical fare found around Oxford.

“I just cook the kind of food I’d wish was available to me if I wasn’t a chef,” Evans said. “I don’t think Oxford is as entirely contemporary. They like their fried foods, which is great, but just not the kind of food I want to eat every day.”

One demographic that has taken an especially keen liking to the Evans’ way of cooking are displaced Texans. Search for Oxford Mexican restaurants and you will be led to the likes of South Depot and Taco Bell, which may be fine for the typical patron. However, for Texas natives, surviving on a diet of fried chicken and sweet tea can leave a craving for authentic breakfast tacos and Mexican coke. Unlike most chefs in Oxford, Evans seems to understand this need.

After a visit to Houston, Evans took the initiative to learn how to prepare Texas-style breakfast tacos, which he now sells for $5 a pair.

“We get a lot of Texans from Houston or Austin on football weekends,” Evans said. “The best taco I ever had was in Houston at a laundromat in a strip mall. It was a breakfast taco, potatoes and roasted jalapeños, and I thought, ‘My God, this is what a breakfast taco is supposed to taste like’.”

Oxford Canteen is open Tuesday through Saturday from 10 a.m. – 3 p.m. Canteen is most popular among Oxford’s business people and university faculty looking to get off campus. Evans is hoping to draw in more Ole Miss students with special hours for pop-ups and brunch. The occasional events are promoted through social media and give Evans an opportunity to try new dishes.

Evans hopes patrons walk away having tried something new or think of classic dishes in a different way. His creation process involves a lot of trial and error to figure out what works best. 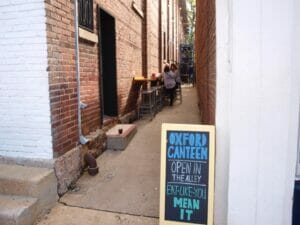 Ellery Jividen is a senior print journalism major in the Meek School of Journalism and New Media. She can be reached at efjivide@go.olemiss.edu.