An American in Paris: Why French Folk Don’t Get Fat and Other Musings 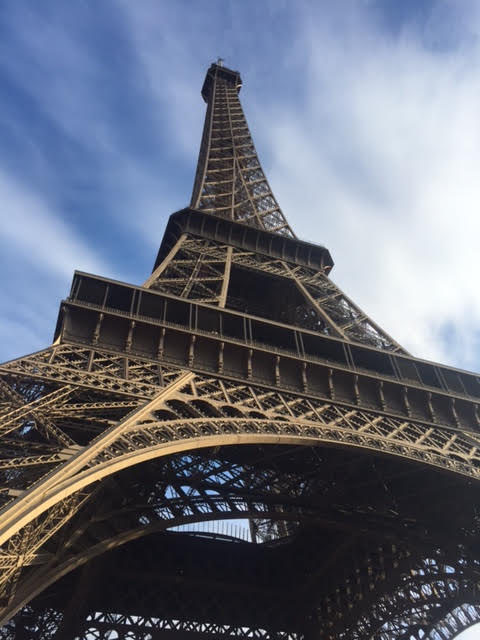 SOUTHERNISM OF THE WEEK
Lagniappe: A little something extra thrown in for good measure. An expression peculiar to the Deep South, where French and Spanish colonization once ruled.

For the past few days, I have been An American in Paris. It’s been a time spent contemplating philosophical, gastronomic and aesthetic issues.

We Americans tend to have an uneasy relationship with our European and Asian counterparts. After all, it was the old world and old ways many of our North American settlers fled in search of new beginnings, like immigrants have been doing since Adam and Eve were kicked out of the Garden of Eden. We take a sheepish pride in our general inability to speak anything but American plus a teensy weensy bit of Tex-Mex or Cajun Vietnamese or Godfather Italian.

For those of us with deep roots in deepest Dixie, visiting the “Old Country” feels like a bit of déjà vu all over again (love ya, Yogi Berra). The end-of-summer garden flowers, the foods, the humidity, even the mingled scents wafting in the misty breezes here in Paris, all seem vaguely familiar to me.

I’ve seen nary a glimpse of Gene Kelly or Leslie Caron strolling along the Champs Elysee. I haven’t heard any Gershwin music tinkling out of bistros, although French accordion panhandlers populate the Metro trains like jazz musicians hustling in the French Quarter in NOLA. Nor have I glimpsed the Pink Panther or Inspector Clouseau. But I’ve walked past the philatelic stalls that set the stage in the movie Charade. I’ve ridden up the Eiffel Tower elevators to view a spectacular sunset as the lights of Paris twinkled on, and my long suffering husband and I have wandered the quais along the Seine.

I’ve visited the obligatory tourist sites as well as some not so obligatory. A day at the Louvres reminded me of why I love art history and why so many American collections of the Old Masters works cannot ever compare to those amassed by heads of state during the days when the painters actually created them: There’s just not enough money in the world to buy it now, even if the buyer had access to enough first-rate material in the marketplace. I remain ever grateful to the Monuments Men and their colleagues.

A day visiting Versailles reminded me of why working people have risen up time and time again against inequality. FYI, there is such as thing as over-gilding the lily. A morning pilgrimage to the Paris Holocaust Museum made me grateful for my father’s French Jewish ancestors who made their way to America and had the privilege of fighting Nazis instead of being gassed like kinsmen shipped to Auschwitz during the last French roundup in 1944.

And I’ve enjoyed the food.

Addicted during my preteen years to Julia Child and her “Learning the Art of French Cooking,” and having apprenticed over a Creole cooking pot under the guidance of my father, I remain fascinated by the breadth and elegant simplicity of French cookery.

French cuisine of everyday life is not the stereotype of heavy sauces or contorted stacks of disparate components. Instead, it consists of layers of the freshest of ingredients, usually held together with light flavorings. Farm-to-table is a concept that never went out of fashion in France. Packaged and processed are curse words when mentioned with regard to food.

Popular French writer Mireille Guiliano was onto something in 2004 when she wrote French Women Don’t Get Fat after returning overweight from a year-long visit to the United States.
She had to re-learn her French foodways in order to lose the weight. She developed a food philosophy in the process that has been adopted by millions and sold an equal number of books. (See mireilleguiliano.com)

Guiliano’s concept, which melted away her American poundage, is simple:

Everywhere we visited during our French sojourn, the concept ruled. Every serving of foie gras, the cheese board selections with crusty bread, and even the entrees and the desserts looked tiny compared to our typical American big-gulp sizes. Yet the combinations of many different flavors at a single sitting invariably left us more than satisfied.

Our first night in Paris, Hubby and I experienced the tasting menu of our boutique hotel’s young chef. The seven “courses” consisted of single dishes. They ranged from an amuse bouche consisting of a one-inch circle of fresh mint-leaf sorbet wrapped in spun sugar, to roasted squab (the fancy French term for pigeon) marinated for 48 hours in miso and cocoa. Note: That pigeon didn’t taste like chicken.

Each small but savory dish was carefully constructed to provide an explosion of flavors of delicately balanced fresh herbs and butter, mirepoix or Demi glacé, and the freshest of olive oils. Our Southern Foodways Alliance would have been proud.

By the sixth dish, this dame had to push away the plate, unfinished, albeit still desired… No “must eat every bite” guilt could prevail. The sensation of satiety was like that at the end of a family reunion potluck.

The grand finale consisted of a row of four perfectly formed inch-square sweet brioches so petite that only Ratatouille could have formed them. The minimalist white porcelain board of sweet bread came with another porcelain plate brushed with a thin skin of melted chocolate for dipping the brioches.

About as far from Cinnabon as one could get, those chocolatey mini-brioches nevertheless provided equivalent satisfaction in each bite.

I’ve taken to heart the “French Girls don’t Get Fat” approach to cooking and dining and fully intend to execute the concept when I get home. Meanwhile, there’s Vienna to conquer. They’re known for pastries and coffee and chocolate, three of the essential girl food groups.

Some days it’s just good to be the king. 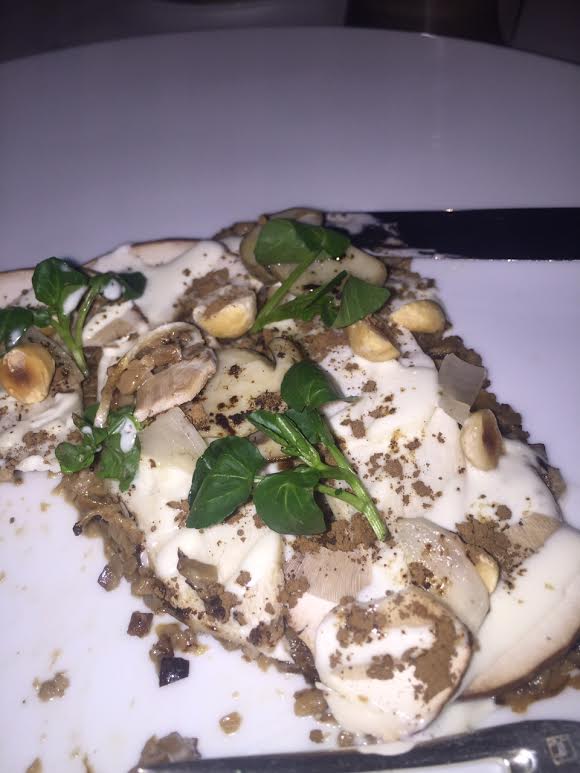 MUSHROOM DUXELLES DELIGHT
Duxelles is a classic French paste that may be eaten as a spread, or used as a filling for stuffed veggies, or served as a condiment or platform for grilled fish or meat. Everyone should master this basic recipe, which freezes well for future use. Our chef topped a plate of Duxelles with thin-sliced mushrooms to be eaten as a stand-alone appetizer.

Sprig of watercress for decoration

Reserve two to three of the most perfect mushrooms. Slice them paper thin vertically and set aside. Chop remaining mushrooms fine, stems and all. Clean and fine-chop the shallots or sweet onion and measure out about a fourth of a cup for this recipe.

Sauté the onion or shallots and garlic with first salt in butter. As they begin to soften, add the chopped mushrooms and simmer until the mushrooms release their liquid. Stir in second salt, parsley and lemon juice. Simmer until liquid reduces and the mixture becomes thick. Remove from heat.

Spread paste in a small dish or on a small plate. Top with a single layer of thin-sliced mushrooms and a sprig of greenery. Serve with a few toasted walnuts and crusty bread.