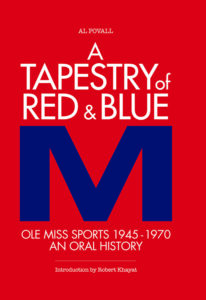 A Tapestry of Red & Blue: Ole Miss Sports 1945-1970, An Oral History, written by Al Povall, is an intriguing book about Ole Miss during the a phenomenal time of history and sports.

“In the 64 interviews (in Tapestry), I would guess that there are somewhere in the neighborhood of 250 individuals mentioned and in some cases, discussed, perhaps more than those individuals would like,” Povall said. “The stories range from poignant to outrageously funny. I laughed my way through most of the interviews, and I believe that the reader will be amazed at the stories that together compromise Tapestry.”

Povall said he got the inspiration to write Tapestry after hearing one of his clients, Jim Bennett, talk about his return to the University of Mississippi after he served in World War II. Among the talk of Bennett and his new bride living in Vet Village, old army barracks veterans lived in on campus, and the way of life at Ole Miss in the 1940’s, Povall was intrigued about his stories of John Vaught leading the Ole Miss football team to a SEC Championship in 1947.

“He talked about how John Vaught took over a football team that had won only two games in 1946 and led them to the SEC Championship in 1947,” Povall said. “That team was laden with returning veterans like Charlie Conerly, Buddy Bowen, Bobby Oswalt, Bill Erickson and Dixie Howell, all decorated veterans who had seen major combat during the war.”

Povall was “mesmorized” by Bennett’s tales.

“Mesmerized by his tales, I thought then that someone ought to record those stories, because the stories were then, and are now, important history,” Povall said.

Along with the stories of Jim Bennett, Tapestry  was inspired by The Glory of Their Times, a book by Lawrence Ritter about the early years of baseball. Tapestry captures many moments throughout the John Vaught era of football and the years that J.D. Williams served as Chancellor to Ole Miss. The book is actually a one of a two volume set.

“The second volume, which will come out sometime in 2016, covers everything during the same era that Tapestry did not cover,” Povall said. “I have not completed A TIme Remembered, but it is likely that I will have to exclude some wonderful stories. There is simply too much material to publish, as all of it together would rival the King James Bible.”

A Time Remembered will cover the same years as Tapestry, 1945-1970, but have broader stories. According to Povall, this was the period when the university produced many Rhodes Scholars, Woodrow Wilson Fellows, several national championship football teams, two Miss Americas.

“This period was truly a golden era in the history of the university,” Povall said. “The interviews in A Time Remembered cover everything from the clothes we wore to the dances we danced, from the whiskey we drank to the cars we drove, and didn’t have, to the movies and dating.”

For the two books combined, Povall said he interviewed roughly 160 Ole Miss alumni, 64 of those interviews will be featured in Tapestry.

“Archie Manning, as he did on the football field, was a wonderful interview,” Povall said. “He was candid in describing his feelings about being named the starting Ole Miss quarterback in 1968, which is where I decided to end the book.”

Al Povall and some contributors will sign at Lemuria Books in Jackson on Dec. 1, 2015, and Dec. 3, 2015, in Cleveland, Mississippi a the Ellis Theatre.

“A Tapestry of Red & Blue: Ole Miss Sports 1945-1970 contains many poignant memories told by the people — in their own words — who lived them, who made those memories in that golden age of Ole Miss Sports.” –Robert Khayat, Chancellor Emeritus, Ole Miss

“Vaught’s practices were harder than Red Drew’s. We did a lot of hitting. Coach Vaught was a frim believer in hitting. If you could knock the other guy down you were in good shape. And he expected you to play through pain.” -Farley Salmon

“In the 1959 LSU game, I called a straight drop-back, pocket pass. I said, ‘Guys, I’ve got to have a little more time to throw.’ Richard Price is our left guard, and he looks at me and says, ‘Jake, I got my hands full. It’s every man for himself.'” -Jake Gibbs

“I played high school ball for Jack Carlisle, college for John Vaught and professional for George Allen and Vince Lombardi. So I played for great coaches and what they had in common was intensity and brilliance.” -Mike Dennis

Emily Newton is a staff writer for hottytoddy.com and the editor for Experience Oxford magazine. She is a recent graduate of the Meek School of Journalism and New Media at Ole Miss. Ms. Newton can be reached at emily.newton@hottytoddy.com.