The End of All Music – Just the Beginning for Oxford

Oxford’s own record store, The End of All Music is located on North Lamar selling new and used vinyl records. Greenwood native David Swider opened the hole-in-the-wall record store on March 1, 2012 to fill the gap in a market that did not yet exist in Oxford.

“I opened the record store about four years ago in Oxford, mainly because there wasn’t one. I’m a big record fan and I wanted to be able to go somewhere to buy records for myself,” David Swider said. “Oxford’s a pretty liberal, artsy town so I felt like it was the perfect kind of place for a record store. So far, it’s proved me right. Here we are four years later, going strong.” 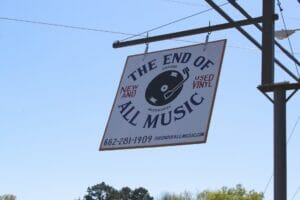 Featured among the likes of Southern Living as one of “The Best 5 Record Stores in the South” and named one of “The South’s Best Shops” in Garden & Gun, The End of All Music coins its name from the tombstone of Mississippi native and blues musician, Junior Kimbrough.

The store, with its cool yet unintimidating atmosphere with a constant hum of curated music playing in the background, serves the likes of Ole Miss students and locals. It is a place to simultaneously discover new Indie artists and stumble upon classic blues musicians. 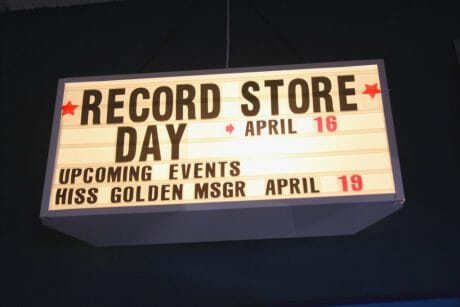 “Our customers are across the spectrum,” Swider said. “College students are a good portion of our clientele, plus in Oxford you have a rotating cast of new customers every four years. We have middle school kids all the way up to grandmas and grandpas shopping here.”

The End of All Music will celebrate Record Store Day on Saturday, April 16 with give-aways, live music, food and beer. Record Store Day is celebrated globally to as a way for record store owners to celebrate their own communities and to increase awareness of the culture of the thousands of other unique record stores in the U.S. and abroad. 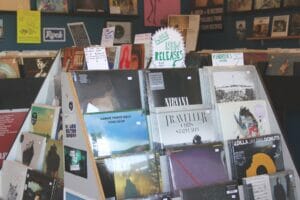 “It will be our fifth Record Store Day to participate in,” Swider said. “It’s our biggest day of the year. We will have a lot of limited edition type records coming out that day. The record store likes to use the day to throw a block party and give thanks to all the folks that come through the shop all year long. It’s a good excuse to drink some beer, listen to music and celebrate the community around the record store.”

Several local businesses will help The End of All Music celebrate Record Store Day including High Point Coffee, BBQ Smokeshop and Yalobusha Brewery. Raffle tickets will be handed out in the store throughout the day for a chance to win speakers, headphones, concert tickets and more.

Hannah Pickett is a HottyToddy.com intern. She can be reached at hannah.pickett@me.com.