Bruce Levingston Speaks Out for Civility on Chris Matthews’ ‘Hardball’ 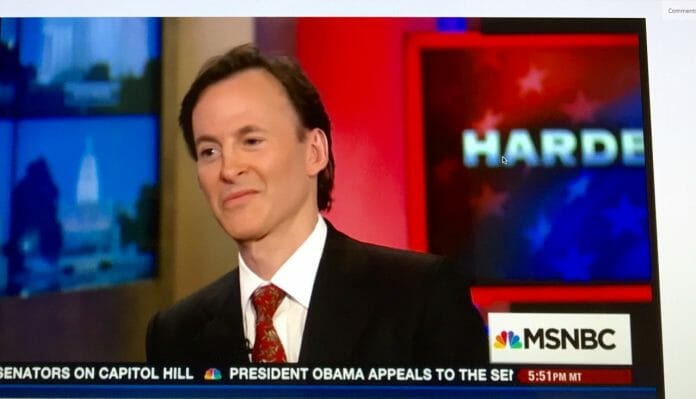 Watch the video by clicking on the provided link: Hardball with Chris Matthews.

The invitation came to be when Chris Matthews heard that Levingston was performing in Washington D.C. Matthews had heard Levingston perform and kept up with his latest releases: a new album, “Heavy Sleep” (2014 ) and a book, Bright Fields: The Mastery of Marie Hull (2015) that features a revolutionary portrait painter from Summit, Mississippi.

Levingston said, “It was very special to do the interview with Chris. He and his entire staff were extremely gracious to me when I was in the studio and many people there came up to me to discuss my music and recent performances. The place was filled with familiar faces one sees every day on MSNBC. I had the chance to watch Chris interviewing and discussing political issues with the other guests on the show. It was pretty lively!”

Matthews and Levingston talked about Marie Hull, an iconic figure who grew up near where Levingston himself did.

Levingston hopes that the viewers will be inspired by Marie Hull’s story as a visionary artist who triumphed over the odds to become one of the important voices of the South.

“She was born in 1890 when women were not even allowed to vote,” Levingston said. “As a woman, she faced that issue as well as many other obstacles yet overcame these to get a fine education and create a place for herself in the world of art.”

Levingston admired Hull’s grace and courage as she painted “beautiful portraits” of African-American men and women, tenant farmers and sharecroppers, and rich and poor people – essentially treating everyone in Mississippi equally.

He said, “I believe that Hull’s own experience as a woman of her era helped sensitize her to difficulties others faced. One of the remarkable things about her portraits from the 1930s was that she portrayed all people equally, regardless of their race, revealing their common emotions, feelings and humanity. Each subject is portrayed with great dignity and sensitivity.”

Levingston noted “An American Citizen” as one of Hull’s memorable and important works because it was a portrait of an African-American who was born into slavery.

He said, “I think this was a powerful and significant gesture on the part of Marie Hull to restore the dignity and place in society that he should always have had, and to make a quiet but important statement about how we should treat all of our citizens. That was in 1936!”

During the interview with Chris Matthews, Levingston pointed out that such civility towards each other can go far in bridging differences even when people are in disagreement over issues.

He said, “I believe there are many good, kind and wonderful people here in our state, as well as across the nation, who are people of good will. It is only by speaking with one another civilly with open ears, minds and hearts that we can find common understanding. I believe that was what Marie Hull was expressing through her painting.”

He noted that such civility exists in small towns and cities such as Oxford where he has been living for a few years now.

“Oxford is a very special town,” Levingston said, “It is very much like the town I grew up in and those that I mentioned in the interview. People here do talk with one another and care about one another, and it is a privilege to call Oxford home.”

Levingston hails from Cleveland, Mississippi where he grew up just a bit north of Marie Hull’s hometown. The book, Bright Fields – The Mastery of Marie Hull, can be bought from the University Press of Mississippi.