“They believe that they can do more faithful work together than apart,” Rev. Rester said.

Rev. Chris Diggs has been pastoring both churches since 2014 (he has been the pastor of Burns since 2013) and has been splitting his time between both churches before the merge. Both Burns and Hammit Hill UMC were founded in the 1800’s. They were established in the early 1800’s when the community was known as Freeman Town.

“This whole community was African American,” Rev. Diggs said. “Burns church was thriving. Because of growth of UM, several people sold their property.” According to Rev. Diggs, most of the congregation members moved and still live further out in the county now; several of the Burns members are generational members. “Dynamics have changed, and this community isn’t primarily African American anymore. It will be beneficial for us to go out into the county, where most of our members live.” 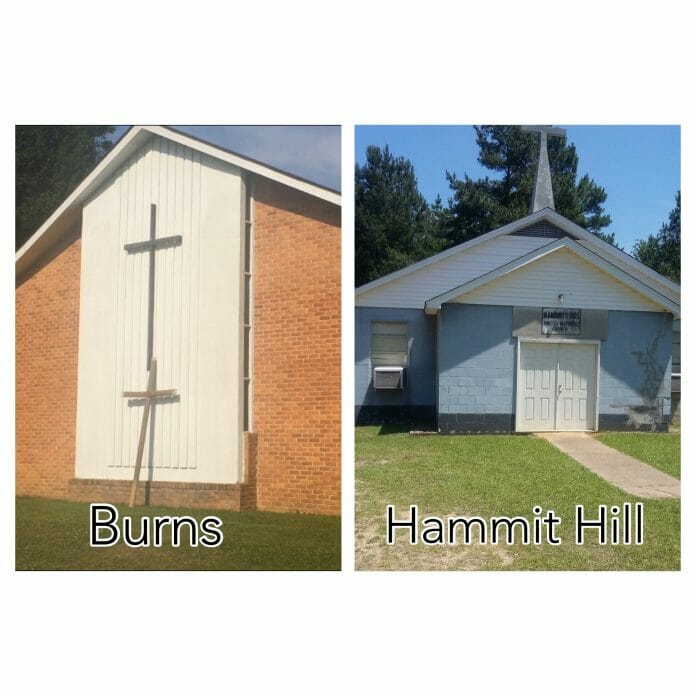 Likewise, the Hammit Hill UMC was founded in the 1800’s. Land records show that on July 10, 1885, a total of $6 was given for the purchase of the land the church sits. The current building was erected in 1961, of which its members provided the materials and labor.

According to Rev. Diggs in a Facebook post, “Times are changing, and it is imperative that we accept the challenge to merge to become more effective in ministry here in the Lafayette, Oxford and University of Mississippi (LOU) community.”

As far as bringing the two churches together in one building, Rev. Rester said new construction will soon take place.

“They are in the process of purchasing land to build a church and bring both churches together,” Rev. Rester said. In fact, the churches are buying 10 acres along Old Sardis Road and the current Burns UMC church building, and land will be under contract to sell in late August, according to Rev. Diggs.

“Local businessmen have reached out to help us, help us grow and help us during difficult times,” Rev. Diggs said. “We are in constant relationship with Oxford University United Methodist Church and Dr. Eddie Rester. We worship together; they seem like family to us.”

“Ed Meek purchased our van to help us. Dicky Scruggs has donated heavily to our GED program, and other local businessmen have contributed to our growth as well.,” Rev. Diggs said of other contributions to the church.

Rev. Diggs said both congregations will meet at 11 a.m. every Sunday at the Burns UMC current location until the property is sold, except for the fourth Sunday of each month, in which the congregation will meet at Hammit Hill UMC.

Emily Newton is a staff writer for hottytoddy.com and the editor of Experience Oxford magazine. She can be reached at emily.newton@hottytoddy.com.