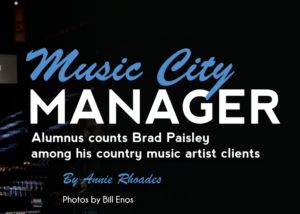 “I never really knew what I wanted to do,” Simmons says. “But I always loved music.”

That love of music paved the road to his success. Through hard work, passion and determination, Simmons navigated the peaks and valleys of the music industry to ultimately make it to the top. However, the journey was anything but easy.

“I met and started managing a cover band in Mississippi called Sassy Jones around 1976,” Simmons says. “I was trying to manage them, but, more than anything, I was taking up money at the door when they were playing local clubs. I really didn’t know what the hell I was doing. It’s not like it is today. There wasn’t a place to go and learn to do what we did.”

“All managers were either friends of the band, worked at the record company, were their lawyer — all different things. Now today you can get a degree at Belmont [University] in all kinds of music business-oriented stuff, but when I started, there was none of that.”

Born in Swainsboro, Ga., in 1952, Simmons and his family moved to Jackson the summer before his sophomore year of high school.

“I consider myself having grown up in Jackson,” Simmons says. “I’m not a native Mississippian, but Mississippi is home to me.”

A graduate of Provine High School, Simmons knew he wanted to attend Ole Miss. He enrolled in the College of Liberal Arts with an interest in psychology and political science.

“I never really looked at any other place,” he says. “I had the time of my life at Ole Miss. I got a great education and stayed an extra year. I even saw a Billy Joel concert at the Tad Pad with about 800 people. It was fantastic. Oxford was such a sleepy little town then, and I loved it. I enjoyed everything Ole Miss had to offer.”

After graduation, Simmons began working at a residential treatment facility for emotionally disturbed children on the Georgia coast. He soon returned to Mississippi to work for a similar facility in Crystal Springs near the bustling music scene in Jackson.

“When I first graduated from school, I went to work with emotionally disturbed kids, but my heart was always in music,” Simmons says. “I couldn’t really play very well, so I knew if I was going to be in the music business, I had to do something that was going to be on the business side.”

“They were a very popular band that played in the fraternity houses, and I wound up really getting to be friends with the band leader, Johnny Crocker, who’s still like my brother today,” Simmons says. “That wasn’t a national act or anything, but that’s basically how I got started. Jackson was a really happening place in the ’70s with Malaco [Records] being there cutting hit records.”

Around the same time, Simmons landed his first big client in fellow Mississippian and singer-songwriter Paul Davis, best known for his late ’70s and early ’80s chart-topping hits “I Go Crazy,” “Cool Night” and “65 Love Affair” to name a few.

“In 1978, I went to LA with Paul to do ‘I Go Crazy’ on ‘The Midnight Special,’ which was a big television show back then with Wolfman Jack,” Simmons recalls. “I had never really been much west of the Mississippi River until then. Paul was my first taste of the big time if you will.”

Still somewhat new to the business and eager to further his career, Simmons happened upon another opportunity while trying to secure a record deal for Sassy Jones.

Simmons arranged for Bobby Colomby, head of Artist and Repertoire for Epic Records and a drummer and original member of rock band Blood, Sweat & Tears, to fly in from Los Angeles to see Sassy Jones perform a showcase in Vicksburg.

“He didn’t sign Sassy, but on the way back to the airport, an attorney in Jackson who was with us put in a tape of another Mississippian named Fred Knoblock, singing this song called ‘Another June Wedding’ at Poets, a restaurant and hangout bar in Jackson. [Colomby] fell in love with the song, and when he returned to LA, he signed Fred to a record deal with another label. The title of the song got changed to ‘Why Not Me’ and became the No. 1 pop record.”

Simmons (and Knoblock) moved to LA in 1980, where he managed Knoblock’s career for a couple of years before relocating to Nashville.

“I loved LA, but I didn’t want to live there all the time,” Simmons says. “I liked the music business and was trying to figure out what I was going to do next, so I moved to Nashville. I got my first job there through a friend who was managing Eddie Rabbitt at the time. He asked me if I would go out on the road with Eddie, so I did as his tour manager.”

While Simmons’ stay with Rabbitt was brief, it was through him that he met country music legend Tammy Wynette.

The two became fast friends, and through Wynette, he began working with country rock band Southern Pacific, composed of the Doobie Brothers, members of Creedence Clearwater Revival and Pablo Cruise.

“They didn’t have a whole lot of commercial success, but that kind of started me in Nashville after Eddie [Rabbitt] and Tammy [Wynette].”

From there, Simmons’ music management career took off.

In 1987, he started managing country music band Restless Heart and stayed with them for 17 years while picking up numerous other acts along the way.

Larry Fitzgerald, co-founder and president of the Fitzgerald Hartley Co., says he could not have found a better fit for his company than Simmons.

“Bill is the brother I never had,” he says. “He came to Fitzgerald Hartley with Restless Heart, the very first Nashville act I signed, as their tour manager. After years on the road, he asked if he could come in-house, so to speak, and be my business partner and do their day-to-day management business. Of course we agreed.”

Since joining the firm, Simmons helped add a few famous names to the company’s star-studded roster.

“Restless Heart was my biggest act for a long time,” Simmons says. “Then I started managing Brad Paisley in 2003.”

Country music superstar, singer and songwriter Brad Paisley debuted on the country music scene in 1999 with his first Billboard No. 1 single “He Didn’t Have To Be.” In 2001, he was inducted into the famed Grand Ole Opry.

Soon Paisley was in search of a new manager, and after several interviews, he chose the Fitzgerald Hartley Co. with Simmons serving as his full-time manager.

“He had a manager before me, but he hadn’t exploded to become the big thing he is today,” Simmons says. “A lot of people wanted to manage him, and after interviewing a lot of managers, we won. I think, as managers, all you have is your reputation. Part of your job as a manager is to help them realize their dreams. It sounds bogus, but I really believe that if they can dream it, then I have to figure out how to make it happen for them. That’s what I’ve always tried to do.”

“Brad’s ultimate rise to super stardom and now an icon in our business speaks volumes for Bill’s skills,” Fitzgerald says. “[He] has now gone on to be not only one of the most successful managers in the music business but also a pillar of leadership in the Nashville music community. I am proud of Bill’s success and his outstanding management skills, but his contribution to the Fitzgerald Hartley Co. is certainly key to our longevity as a firm. Obviously I’m glad he is now a managing partner and my best friend.”

Simmons counts Paisley’s 2010 Entertainer of the Year win among the many highlights he has enjoyed throughout his career.

“Being successful at what you love doing is a pretty big highlight for me,” Simmons says. “I never really had a normal job, and I feel really fortunate to have a job I love. Most of my
friends think that it’s just one great time, but it’s hard work, and there are lots of peaks and valleys. You’re never off – there’s always something to do when you have an act like Brad Paisley. As a manager, we are basically the CEO of the company, with that company being the artist.”

Simmons spends most of his time running the Paisley empire from his Nashville office and traveling to at least one of the star’s shows every month. Paisley’s hugely successful 2015
Crushin’ It World Tour was extended through spring 2016 to include a string of new performances.

While the duo’s business relationship is prosperous, it’s the friendship they’ve developed over the years that Simmons enjoys.

“We talk so much, I almost probably talk to him more than my wife,” Simmons says. “Brad is so witty and just a very smart person. He’s what I call a true Renaissance man. He can do so many things well [such as] edit movies and paint, besides being one of the world’s greatest guitar players and songwriters. He could do my job. He’s just one of those kind of dudes.”

Although Paisley’s career demands a large portion of his attention, Simmons still finds time to manage new talent such as country music artist Chris Young, who in January celebrated
his single “I’m Comin’ Over” going platinum in the U.S. In the midst of all of his music management duties, Simmons somehow finds the time to serve on the CMA board of directors and is serving as president-elect. In 2017, he will serve as president, then chairman of the board the following year.

In the midst of all of his music management duties, Simmons somehow finds the time to serve on the CMA board of directors and is serving as president-elect. In 2017, he will serve as president, then chairman of the board the following year.

“I really enjoy it – it’s just another chapter at this point in my life,” Simmons says. “I love being a part of the [CMA Awards] television show, getting to manage the host, and have had a pretty active role in both the CMA Awards and the music festival.”

Sarah Trahern, CEO of the Country Music Association, could not be more appreciative of the time and energy Simmons has devoted to serving with the association over the years.

“Bill Simmons is a valued member of our CMA board of directors,” Trahern says. “I appreciate and respect his passion for country music, business knowledge and numerous contributions to the growth of the association. We are fortunate to have volunteer leaders like [him] who step up and shape the future and worldwide awareness of country music through their involvement with CMA.

“In addition to his direct service as a board member, we work closely with Bill on the award show as his client, Brad Paisley, has co-hosted the show with Carrie Underwood for eight years. Bill does an amazing job of juggling these roles, and his input is key to the success of the program.”

When he’s not consumed with all things music and CMA in Nashville, Simmons visits his Oxford home to enjoy football, tailgating, Ole Miss baseball in the spring and, most recently, Paisley’s concert at The Pavilion at Ole Miss as part of his Country Nation College Tour.

“I love Oxford, and I hope to be able to spend more time [there],” Simmons says. “I’m 63 years old and don’t really see myself retiring at 65. I may not go to the office every single day, but I plan on doing more of the same. I love what I do.”