Rebel Nation: He Still Has To Earn It

Even after an amazing “Manning-esque” performance at Texas A&M in 2016,
Shea Patterson will still have to compete to keep his job in 2017 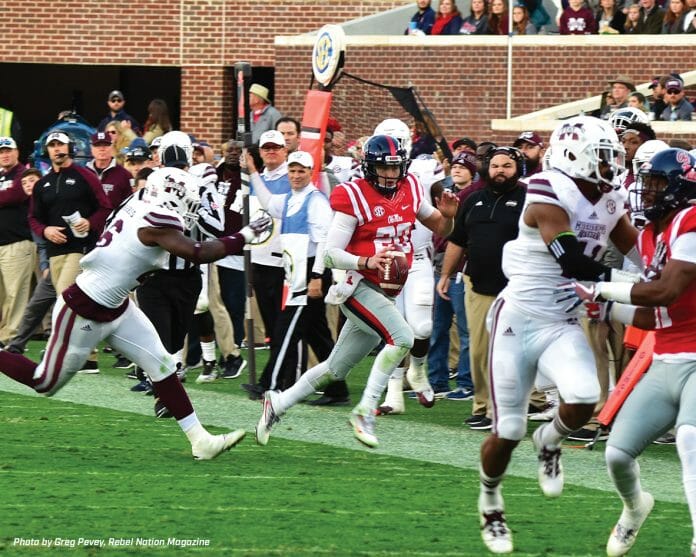 The most surprised Ole Miss person on National Signing Day may very have been Shea Patterson.
Some may have been pleasantly surprised on that day when the Ole Miss class ranking jumped 23 spots from No. 53 on the 247Sports composite list to No. 30.
Patterson was more likely surprised to find he was still competing for the starting quarterback job.
There are two three-star signees in the 2017 class in junior college transfer Jordan Ta’amu and high school recruit Alex Faniel.
There’s even talk of moving athletic rising sophomore Jason Pellerin – the guy Patterson beat for the starting job after Chad Kelly was injured last November – to another position.
And Patterson’s not the clear starter?
Just one year ago many anointed Patterson as the Ole Miss quarterback of the future. He was the No. 1-rated quarterback in the 2016 recruiting class, the No. 4-rated overall prospect.
Star brightness gave the Ole Miss 2016 class an electric look. It had two five-stars and 11 four-stars as selected by 247Sports.
Patterson was the No. 4 overall prospect, and he wasn’t even the highest-rated player in Ole Miss class. That was offensive tackle Greg Little, who was ranked third.
It wasn’t hard to watch the video of Patterson’s quick release, to see his footwork, to read the analysis of recruiting media and anoint him as the man.
The hype only grew stronger after Kelly’s injury when in dramatic fashion the redshirt was pulled off Patterson, and he responded by passing for 300-plus yards and a couple of touchdowns to lead Ole Miss past Texas A&M at raucous Kyle Field.
Asked on signing day why a junior college quarterback with only two years to play would sign with a team that had an entrenched sophomore starter Freeze said that the sophomore really isn’t entrenched.
What did Freeze tell Ta’amu to convince him to choose Ole Miss?
“Quarterbacks, you’re one play away from playing. You get an opportunity to come and play in the Southeastern Conference and compete. We’re going to compete for the starting job, even though we all feel like Shea Patterson is the guy.”
What we have here are theatrics. 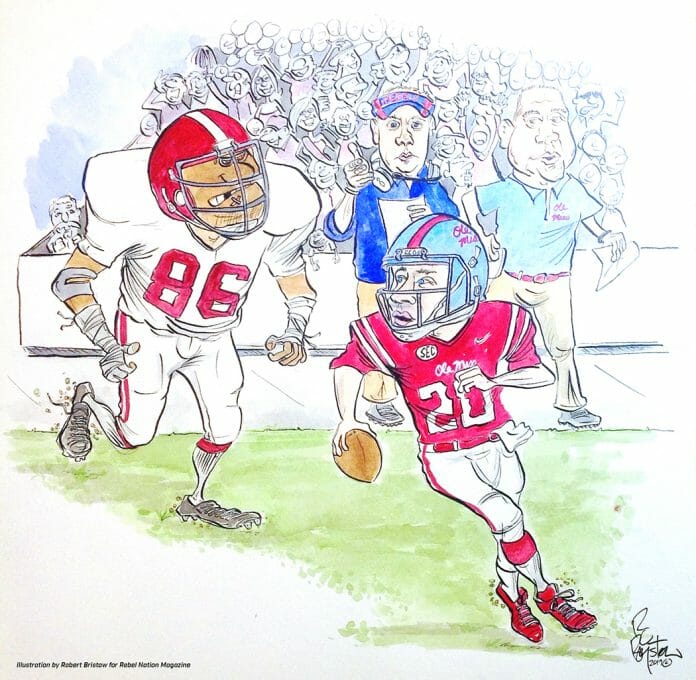 Shea Patterson earned the starting job after Kelly’s injury. He strengthened his hold on it against Texas A&M and didn’t lose it against Vanderbilt and Mississippi State, although those were two rather dismal offensive performances with just 37 combined points and three turnovers.
The last two games were not the results Ole Miss needs from its starting quarterback.
The most disappointing thing about the last two games, however, was the lack of chemistry between Patterson and a deep and talented group of receivers.
The number of dropped passes in the last two games – a 38-17 loss at Vanderbilt and a humbling 55-20 loss to Mississippi State – were alarming. 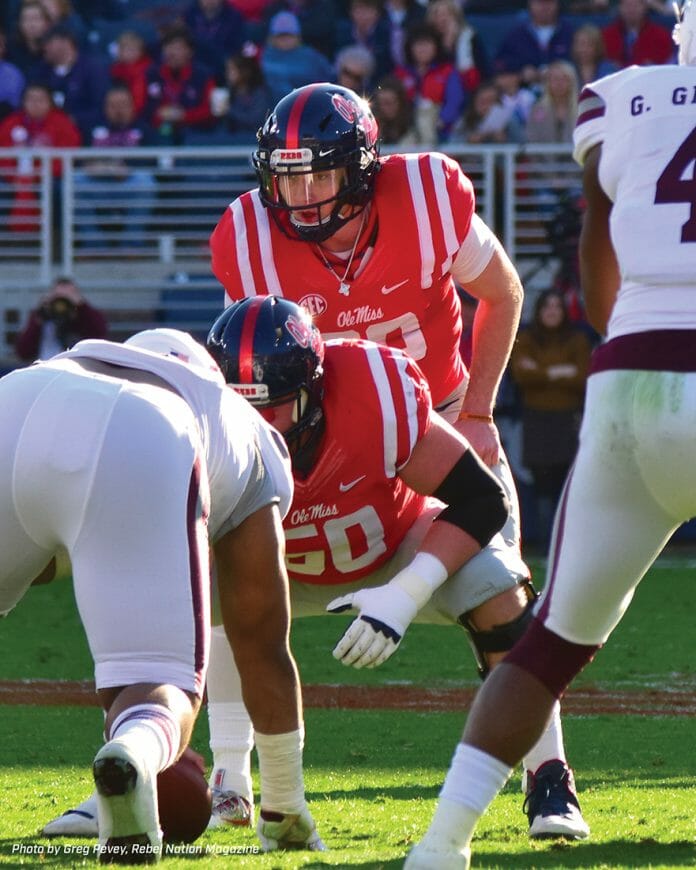 Freeze would say later that he is not concerned by that season-ending trend, that he believes the hundreds of reps and the time that Patterson and the receivers will spend together will cure the drops.
You would like to have seen Patterson emerge from his three-game season with better than a 54.5 completion percentage. In the Freeze offense, you’d really like to see that up around the lower- to mid-60s.
That’s more of the elite figure you expect from Patterson.
Perhaps the expectations are too high, the early praise too much. It’s too early to say that. Patterson has done nothing to suggest the buzz about him was not deserved. With fewer drops at season’s end – Freeze counted at least ten against Vanderbilt – the completion percentage would be much higher.
Receivers aren’t going to catch every ball, but with the skill level that is amassed at Ole Miss right now, they should catch most.
The issue, it appears, was the “catchability” of Patterson’s ball compared to Kelly’s. There was some difference, and receivers were much more used to Kelly. Again, time is expected to heal those wounds.
As far as turnovers, Patterson had three interceptions in three games, two of them in the finale against Mississippi State that could have been avoided with a little help.
One Patterson pass was underthrown to Quincy Adeboyejo in the end zone, allowing MSU safety Jamal Peters to turn and make a play. Adeoboyejo, though, did not turn and adjust, didn’t fight for the ball and try to prevent the interception.
Later in the game’s final few minutes a screen pass to running back Akeem Judd hit Judd in the hands. He bobbled it, juggled it and kept it in play long enough to be picked and returned for a touchdown.
Plays like that are a part of football but need to be considered in trying to gauge Patterson’s fitness moving forward.
Had there been fewer drops and one interception as opposed to three his stat line would look a lot different going into his sophomore year.
As far as his looming competition, most coaches aren’t going to stand before media on signing day and throw water on new recruits by telling them they have no chance to get on the field.
That’s especially true with a new offensive coordinator and wide receivers coach, just two of the five positions Freeze has had to fill in the off-season.
In some respects, the competitive field will be level in the spring as Patterson and Ta’amu will both be seeing the offensive system of Phil Longo for the first time. Faniel will arrive in the summer.
“Phil hasn’t seen any of those guys,” Freeze said. “They’ll go out and compete.”
Freeze is hopeful that competition will play out in such a manner that he feels confident in moving Pellerin to another spot, possibly tight end.
“Part of the thinking process here is Jason Pellerin and where does he fit in,” Freeze said. “Is he the next Evan Engram? If there’s a backup or two, you can do that with him. Or is he the best guy to play quarterback? Or is it a combination.”
All the bases are covered in that statement.
The truth is there’s always competition.
Longo hasn’t been in a full-pad practice with Patterson, but he’s had plenty of time to break down video on his presumed starter and plenty of time to hear Freeze talk about the things Patterson did well and did not as well in three games.
That’s an advantage for Patterson, who if his play last season is an indication – and it likely is – will continue to create his own advantages when practice opportunities arrive.
Ta’amu and Faniel will get their reps.
Throws will be charted, and statistics will be evaluated.
If Jordan Ta’amu, a 6-2, 200-pound dual threat guy completes 75 percent and throws no interceptions through 15 spring practices and plays just as flawless in August camp then he’ll give Freeze a real reason to pause and take a second look.
Pellerin and Faniel will get reps too, but if Freeze is giving real thought to putting Pellerin someplace else, it seems like spring would be a good time to make that move.
What Freeze would like to see for his quarterbacks in the months is for Patterson to build on the legend he began at Texas A&M, for his timing and chemistry with receivers to take a big step forward, for Ta’amu to show an early competency level and for Faniel to follow that path as well.
The idea of Pellerin (6-4, 230) as a threat in the passing game as a tight end of some sort of H-back is intriguing.
If Freeze can gain confidence in his newcomers, he can have a more staggered pecking order behind Patterson with an upperclassman who’s cut his teeth, to some degree, two years out of high school and a true freshman who’s embarking on his journey.
“We signed the two quarterbacks to get us spread out and back to the right format in the quarterback room – the freshman, sophomore, junior, senior-type deal,” Freeze said. “Now we have four guys on scholarship after playing last year with three.”
So, Patterson may have been surprised on Signing Day, but he can relax.
Yes, there will be competition, but Ole Miss signed an elite talent at the position in 2016. It will be difficult – not impossible – for one of the newcomers to latch on to the job if Patterson puts in the work on and off the field that is expected of starting quarterbacks in the SEC.
“Those guys will go out and compete this spring,” Freeze said. “I didn’t want to sign two freshmen. I wanted to sign a JUCO guy and a freshman to battle it out in the spring and figure out who the one, two and three guys are. And to figure out where Jason fits in that too.
“Jason needs to be on the field somewhere.”