January 17, 2018
0
390
The Southeastern Conference announced the 2018 Preseason Softball Coaches Poll on Wednesday, with Ole Miss being picked to finish seventh in the perennially deep league.
The Rebels received 81 points in the poll based on a 1-2-3-4-5-6-7-8-9-10-11-12 format. Coaches were not allowed to vote for their own team. Florida was selected to repeat as regular season champions after garnering 11 of 13 first-place votes. Tennessee and Alabama also received a first-place nod.
In garnering the seventh spot, Ole Miss finished ahead on points of Kentucky (76), Georgia (49), Arkansas (39), Missouri (34), South Carolina (30), and Mississippi State (28), all of which received a bid to the 2017 NCAA Tournament.
The Rebels opened preseason practice early last week, preparing for the start of the 2018 season on the weekend of February 9-11 at the Sand Dollar Classic in Gulf Shores, Alabama.
2017 SEC Softball Preseason Coaches’ Poll
(First-Place Votes in Parentheses) 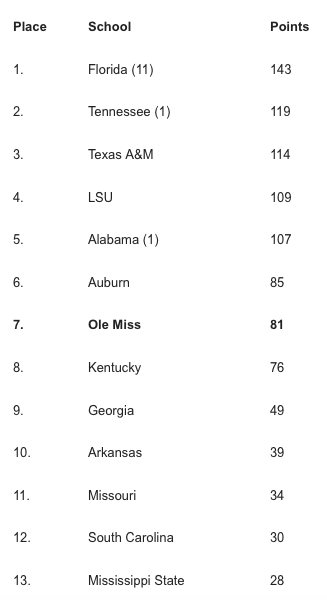 For all Ole Miss softball news and information, go to OleMissSports.com and follow the Rebels on Twitter at @OleMissSoftball, on Facebook at Ole Miss Softball and on Instagram at Instagram.com/olemisssoftball. Fans can also follow head coach Mike Smith on Twitter at @msmithsb16. Additionally, fans can get a behind the scenes look at Ole Miss softball and all of Ole Miss athletics on Snapchat under the handle, @WeAreOleMiss.