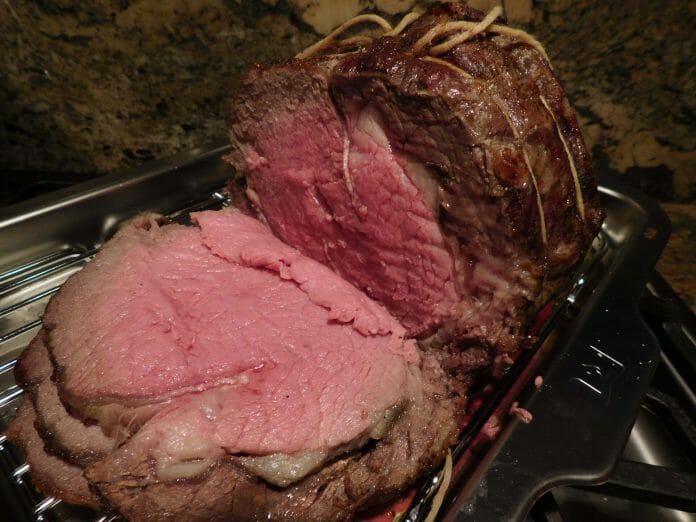 SOUTHERNISM OF THE WEEK
Stiff-necked: A person who’s stubborn and unyielding in a belief or action, who’s just about got their knickers inappropriately in a twist over something…. Like those hard-to-control oxen that just might end up in the ditch, or the rebellious Israelites who disregarded God’s instructions while He and Moses were in conference, or those old Boston Brahmins looking down on the riffraff from Nob Hill. Seems like everybody in the U.S.A. is stiff-necked about something or another right now.

Hello again, World. Let’s Get Cooking.
This Oxonian had to take a time-out in January. After a frenetic, stem-winding 2016, my head felt like it was about to explode from too much travel… too many holidays … too much rich or exotic food … too much political strife … too many memories of folks gone to the Great Beyond.
“Enough,” I thought while updating Christmas card lists, packing away holiday decorations and deep-sixing yet another unfulfilled annual to-do list. As Crash Davis said to Annie Savoy in the final scene of Bull Durham, “Right now I just wanta be. “
And “BE” I did — for three glorious weeks.
I ate well but simply — breakfasting on shirred eggs, lemon curd tarts, or buttermilk bread with fresh-made raspberry jam; lunching on simple salad or pan-sautéed greens; and dining on cheese and crackers.
I read the new and antique cookbooks purchased throughout 2016 that had begun toppling, untouched, off the chair beside the baker’s rack. I actually looked at and read a backlog of magazines, restraining myself from tearing out marginally interesting recipes. I went to the movies. Hacksaw Ridge, Fences and Hidden Figures definitely deserve those Oscar nominations. I binge-watched my favorite tv series. OMG, Sherlock, did you REALLY kill off MARY? I cleaned out the fridge and pantry, and rearranged underwear drawers. I even organized my files (again).
But now it’s time to come back to reality. You know reality. Where the tax files are calling your name, waiting to be completed for the accountant. And where long suffering loved ones are praying for a home-cooked meat-and-three — or even just some cooked meat to go with the cheese and crackers.
Time-out is over. The Life Meter Clock is ticking again, telling me to hoist my cast iron skillet and re-embrace my old K.I.S.S. culinary philosophy to ‘Keep it Simple, Stupid.” After all, Super Bowl week is now upon us, and Valentine’s Day and Mardi Gras are fast approaching.

K.I.S.S. (With) A Roast For Friends And Family 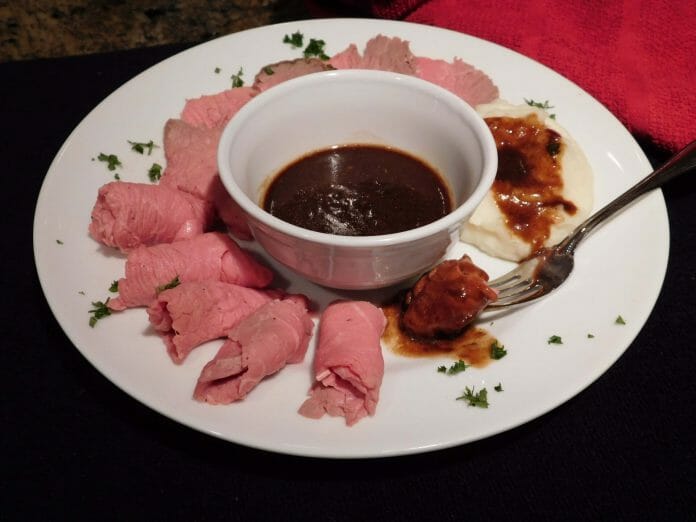 Want to truly K.I.S.S. in the kitchen and soften up a few stiff necks at the same time?
Here’s how. Cook up a succulent standing-rib roast, and pair it with simple veggies and a luscious dessert. Dinner doesn’t get more elegant or satisfying than this combination.
Standing-rib roasts are not cheap, but sometimes are offered on sale. For example, in December, Kroger’s had a holiday special priced at $6.99 a pound, compared to the corresponding price of $14.99 at Costco, and year-round price of anywhere from $27/pound to $60+/ pound at various retailers such as Williams Sonoma or Omaha Steaks.
The first thing to do is understand what makes a standing rib roast different from other roast cuts. A standing rib roast is also known as a prime rib, and both terms are related to a classic butcher cut along the backbone of the cow.
Do not confuse “prime” grade beef with prime rib.
The term prime rib refers to the butcher cut from the “prime or primal” or superior portion of meat along the backbone that includes the sixth through 12th ribs. These seven ribs generally are further subdivided into groups of 3 or 4 ribs in a cut because altogether they weigh 20 to 30 pounds.
Ribs 6-9 are called the chuck end, “blade cut” or “second cut” standing rib. Ribs 10-12, near the sirloin cuts at the back end of the beef, are called the “first cut” or “small end” or “loin cut.” The loin end ribs are more naturally tender, containing more of the “eye” of the tenderloin; but the blade cut ribs contain more marbling and if roasted low and slow, will be tender and with stronger natural flavor.
The “standing rib” term refers to cooking the roast with the rib bones turned down to form a natural rack for cooking.
If you turn a rib roast and look at it from the muscled end, you will notice a thick arching vein of fat that runs inside an outer-edge curved strip of meat. This section, including both the outer strip of meat and the vein of fat, is called the rib cap. A ribeye roast is achieved by cutting away the cap and its attendant fat vein. If cutting it yourself, be sure to save the rib cap for a second delicious meal.
A three-rib “blade-cut” standing rib roast weights about 6 pounds and will feed six to eight people. Feel free to roast it bone-in, or with the bones removed. NOTE: Bones do not add flavor when roasting this cut, but they can interfere with development of a flavorful crust and can skew the overall doneness of the roast because the bone end of the meat will take longer to cook than the boneless end. Also, boneless roast is easier to carve. Just make sure to keep the bones if cutting them away from the roast. Those rib bones make good eats and great gravy when roasted on their own!
My recipe for making a delicious standing rib roast calls for three steps: (1) Dry-brining the meat to transform and tenderize the tissue proteins through absorption of salt; (2) slow roasting the meat; and (3) reverse-searing the meat at the end of the cooking process.
Beef Doneness 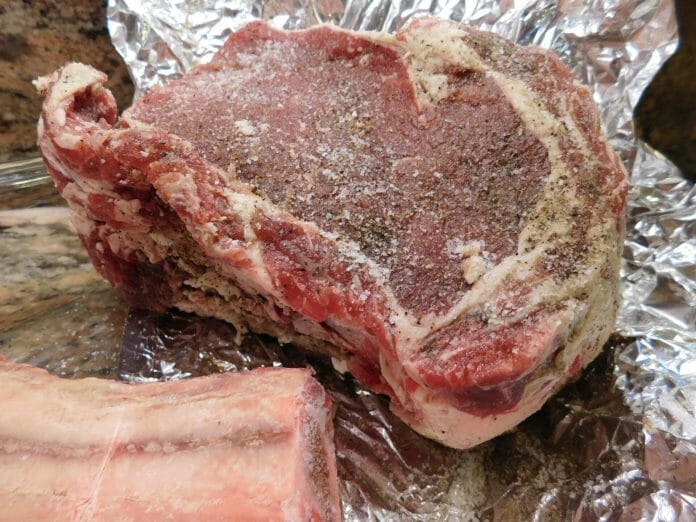 The thickness of the cut of meat, rather than the weight, determines how long to cook the meat to a certain degree of doneness. Of course, the starting temperature of the meat (straight out of the refrigerator or room temperature), amount of bone in the meat, humidity in the cooker, type of cooker, and amount of fat in the meat (fat cooks faster, bones cook slower).
Rare: Seared around edges, red interior (heated to 125˚F)
Medium Rare: Seared outside, pinkish red interior (heated to 130-135˚F)
Medium: Pink center surrounded by brown meat (heated to 145˚F)
Medium Well: Faint pink color throughout (heated to 155˚F)
Well: Solid brown color throughout (heated to 165˚F – a degree of doneness considered ruinous by many beef aficionados)

The optimal internal serving temperature of this type of roast is 130-135˚F, which is medium-rare — when the meat is at its most tender and flavorful. If desiring more doneness, add 5-minute increments to the internal temperature PLUS 20 minutes for the searing at the end. Examples: 145˚F = internal temperature of 120˚F PLUS searing; 155 ˚F = 130-135˚F PLUS searing; 165˚F = 140-145˚F PLUS searing.
2-7 ribs, sheet of fat trimmed off (3 to 4 ribs are preferred)
2 to 3 T fine kosher salt
2 T ground black pepper
2 tsp ground thyme
1 tsp garlic powder
1 tsp onion powder
1 tsp paprika
1/4 tsp cayenne powder, to taste
The roast will have a curved side covered by a cap of fat, and the opposite side will be the rib bones. Trim away the cap of fat and the underlying silver skin membrane. Determine whether to retain the ribs on the roast or whether to cut them away. If removing the ribs, retain for future use, or for making gravy. Tie up the roast with kitchen twine, making it as round as possible to allow for even cooking.
Pat the meat dry and generously sprinkle and rub with kosher salt over all exposed surfaces. Do not overdo the salt, as all the salt will be absorbed into the meat. Place in a tray and cover with foil or plastic wrap. Store in fridge for minimum of six to 24 hours. This is the dry brining stage that tenderizes the meat. I once left a roast dry brining in the fridge for up to 4 days with no ill effects.
Combine the remaining seasonings and store until ready to cook the roast.
Preheat oven to 225˚F. Remove roast from fridge and dust it with the seasoning rub. Allow it to sit for 20-30 minutes, until it comes up to room temperature.
Position roast on a flat rack (not one of those curved ones) set over a roasting pan. Place roast in center of oven and slow roast it for 30 minutes per inch of thickness until center of roast reaches 115˚F. (Check center temperature with a reliable meat thermometer.)
At 115˚F, remove roast briefly from oven, turn on broiler and adjust shelves so that roast will be positioned about 3 inches from the broiler when returned to the oven. Put the meat under broiler and watch with oven door open, making a quarter-turn as soon as the roast top starts crisping and sizzling. It should be about 5 minutes. Repeat three times until top, bottom and both ends (all 4 sides) have been seared under the broiler. Remove from oven and serve immediately with gravy made from the pan drippings.

Laurie Triplette is a writer, historian and accredited appraiser of fine arts, dedicated to preserving Southern culture and foodways. Author of the award-winning community family cookbook GIMME SOME SUGAR, DARLIN’, and editor of ZEBRA TALES (Tailgating Recipes from the Ladies of the NFLRA), Triplette is a member of the Association of Food Journalists, Southern Foodways Alliance and the Southern Food and Beverage Museum. Check out the GIMME SOME SUGAR, DARLIN’ website and follow Laurie’s food adventures on Facebook and Twitter.
Follow HottyToddy.com on Instagram, Twitter and Snapchat @hottytoddynews. Like its Facebook page: If You Love Oxford and Ole Miss…