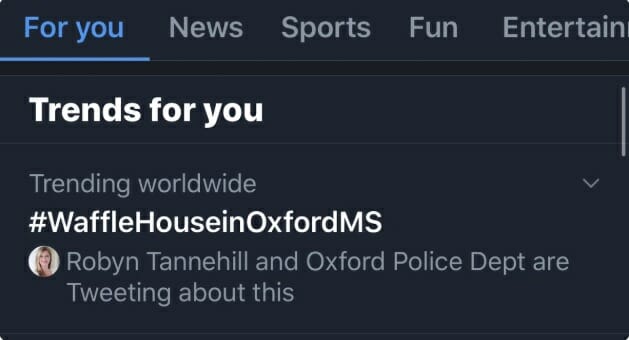 What started out as a fun conversation between the mayor of Oxford and a UM professor over Oxford getting a Waffle House, has turned into a “trending worldwide” topic on Twitter.

“I noticed he and I would often comment on similar things and I just thought he was so funny,” Tannehill said Tuesday.

Case responded to Tannehill’s “follow” with a tweet: “OMG you guys I am SO about to get us a Waffle House in Oxford.” 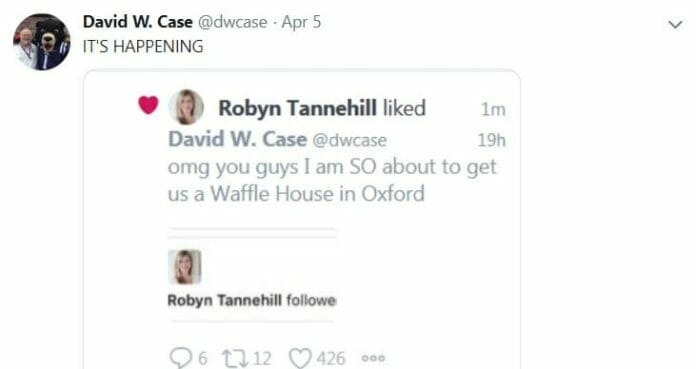 Tannehill responded with “Challenge Accepted” and the Waffle House tweets heard around the world began.

“I went onto the Waffle House site and filled out a form about franchise information saying we wanted a Waffle House here in Oxford and then posted a photo of it on Twitter,” Tannehill said. “Then it just took on a life of its own.”

Using the hashtag @WaffleHouseinOxfordMS, others started posting their wishes for a Waffle House in Oxford, sharing posts and presenting challenges for others to do that same.

Tannehill later posted a screenshot of Waffle House following her on Twitter.

However, Waffle House replied they were simply following “some people in case I get news to share.”

Tannehill said the Twitter exchange was all in good fun and that Oxford was not actively pursuing a Waffle House.

“What it does demonstrate is how hungry people are for something funny and lighthearted on social media,” Tannehill said. “We have wonderful breakfast options that have lines out the door. We’re not trying to recruit any competition for them. It was just something fun.”

Tannehill said she had some negative replies to her tweets from people who felt she should be doing something with her time rather than being on Twitter.

“We worry about and deal with serious subjects every day at City Hall, it’s what I do all day,” she said. “But we’re also allowed to have some fun.”

Tannehill said she’s received several emails and messages from Oxford residents about other businesses they’d like to see in Oxford.

However, it’s not the first time people from Oxford have expressed their devotion to Waffle House.

Newt Cooter Rayburn wrote a song years ago after spending many late nights in Waffle Houses while on tour with The Cooters. It appears on their 2005 album “Chaos or Bust” and it’s always been a goal for the band to get it on the WH Jukebox with all the other great Waffle House songs.

“I kind of want to re-record it with some seasoned rockabilly musicians,” Rayburn said.