Howell, 69, has served as an Oxford alderman since 1993. He also served as mayor pro-tem, or deputy mayor, for almost two decades.

“There are so many things I want to share about Coach and when I can see past the tears, I will,” Tannehill said on Facebook. “For now, I will simply say that the world lost a bright light, a compassionate leader and incredible man. I lost a confidant and dear friend. Some may say he lost his fight but those who knew Coach…we know he won…and I wish I could have seen that smile of his when he saw how many jewels were in his crown.”

As the word spread overnight, hundreds took to social media to express their sorrow over the death of Oxford’s longest-serving alderman. 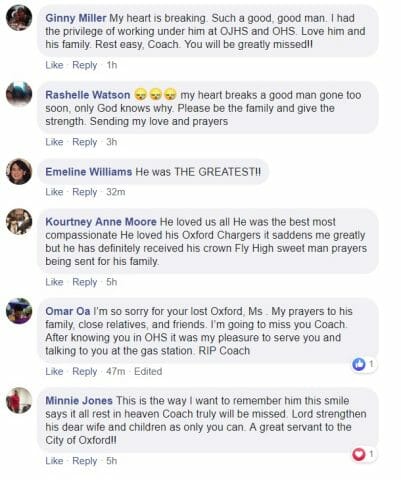 Howell, originally from Brandon, moved to Oxford with his wife, Frances in 1972.

Prior to becoming an alderman, Howell served 37 years with the Oxford School District, starting as a coach and ending his career as assistant principal at Oxford High School. He worked part-time at Enterprise car rental for the last several years.

He earned his bachelor’s degree at Mississippi Valley State in Greenwood to teach social studies and physical education. He later went on to earn his Master’s in Administration from the University of Mississippi while working for the school district.

Howell and Frances have two adult children and three grandchildren.

Funeral arrangements are being handled by L. Hodges Funeral Services. Hottytoddy.com will publish funeral service information as soon as it becomes available.