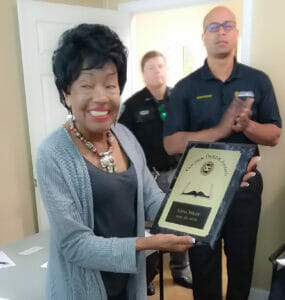 When someone is awarded the Book of Golden Deeds from the Oxford Exchange Club, it’s done so to recognize the person’s outstanding contribution to their community.

Being given the award twice has never happened in Oxford – until Monday, when Lena Wiley, director of Interfaith Compassion Ministry was presented with the award for the second time.

Wiley was nominated for the award by the Oxford Police Department. On Monday, OPD Officer Marcus Wilson presented the Book of Golden Deeds at the ICM office in the Eastgate Shopping Center.

“Mrs. Wiley has had many nights that she did not sleep because she said she always has her phone on in case someone calls needing a place to lay their head, food to eat,” Wilson said. “She put herself aside many times so that others could be taken care of.”

The National Exchange Club’s longest running project, the Book of Golden Deeds Award recognizes dedicated volunteers who give endless hours of their time and talents toward making their communities better places to live and helping those community members have better lives.

“And Lena has certainly done that,” said Margaret King, with the Oxford Exchange Club.

Wiley thanked OPD and the Oxford Exchange Club for the award.

“I’m very proud to have it,” she said, her voice cracking with emotion. “I’m very dedicated to what I do.”