The University of Mississippi’s 2020 Common Reading Experience selection tells the compelling story of the discovery that Flint, Michigan, had dangerous levels of lead in its tap water and follows the intense battle to expose the truth. 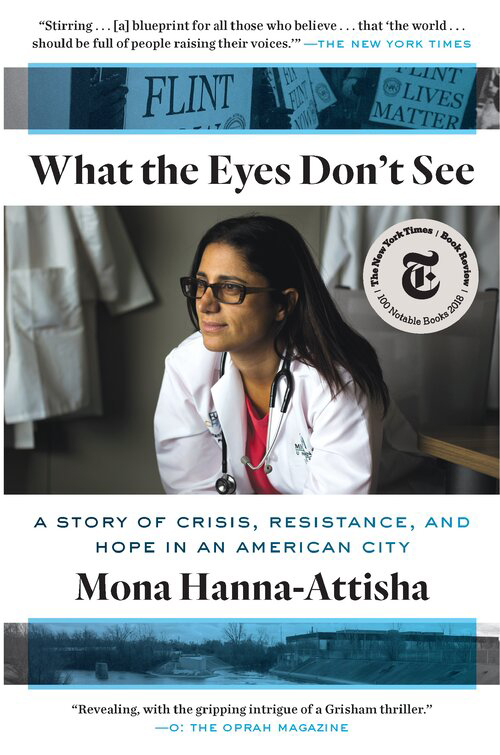 “What the Eyes Don’t See” by Dr. Mona Hanna-Attisha was chosen as the communal text for 2020, and it will be the focus of universitywide discussions and programming throughout 2020. Hanna-Attisha, alongside a team of researchers, parents, friends and community leaders, discovered lead in the community’s tap water and then battled their government and endured a brutal backlash to expose the truth to the world.

Stephen Monroe, chair of the Department of Writing and Rhetoric and of the Common Reading Experience Steering Committee, said the program is among the best in the country and has a proud tradition. He also said that “What the Eyes Don’t See” is immediately relevant.

“This year, the selection committee chose – and the provost and chancellor endorsed – a wonderful and timely book about public health,” Monroe said. “Dr. Mona Hanna-Attisha’s story about the water crisis in Flint will teach us valuable lessons about the past, the present and the future. It is a powerful book.”

Hanna-Attisha is an Iraqi-born immigrant, doctor, scientist, activist and mother whose family’s activist roots inspired her pursuit of justice. She has been called to testify twice before Congress and awarded the Freedom of Expression Courage Award by PEN America. She is also one of Time magazine’s 100 Most Influential People in the World.

The Washington Post called her book on Flint, “a clarion call to live a life of purpose.”

The UM Common Reading Experience, created in 2012, aspires for an enriched sense of academic community through a communal reading of a text. Each year, a committee of faculty, staff and students chose the selection, which is then approved by the Office of the Provost.

“Evicted: Poverty and Profit in the American City” by Matthew Desmond was the CRE selection in 2019. Previous selections include “The Immortal Life of Henrietta Lacks” by Rebecca Skloot, “Crooked Letter, Crooked Letter” by Ole Miss professor Tom Franklin, “The Girls of Atomic City” by Denise Kiernan and “The Education of a Lifetime,” a memoir by Chancellor Emeritus Robert Khayat.

All incoming freshmen and transfer students will be provided the selection with instructions to read it before the fall semester begins. Instructors will utilize the texts in their classes, and faculty and staff are also encouraged to read it.

The author is invited to speak at Fall Convocation each year.

“This is a superbly crafted book about a female protagonist from an immigrant community who uses science to convince self-interested public officials to work on behalf of the underserved citizens who helped to place them in office,” Johnson said. “It doesn’t get much better than that.”

Natasha Jeter, assistant vice chancellor for wellness and student success and co-chair of the CRE selection subcommittee, believes the story covers a lot of important ground.

“It’s candid, thrilling and insightful,” Jeter said. “‘What the Eyes Don’t See’ is a story of courage, social justice, perseverance and sacrifice. The novel is deeply inspiring and details how the actions of one person can impact the lives of many.”

For more information on the Common Reading Experience, go to http://umreads.olemiss.edu/.

A doctoral student in history at the University of Mississippi has been awarded a prestigious honor for future leaders in higher education. Ashleen Williams, who...
Read more
News & Views

University of Mississippi faculty and staff are eligible for a complimentary membership in "BurnAlong," an interactive community that helps users safely manage their health and wellness while...
Read more
Headlines