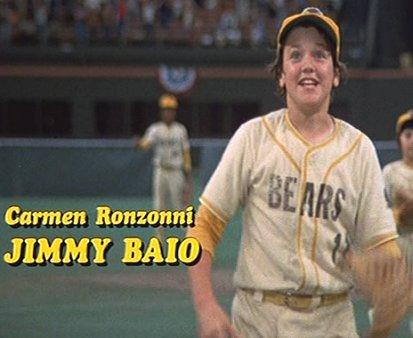 Charles was not in charge of this team’s championship run, but his cousin was.

With Coach Morris Buttermaker out of the picture, the producers of The Bad News Bears in Breaking Training needed to augment the club with a new face or two. And with the lovely Amanda retired from baseball, pitcher became the Bears’ greatest recruiting need. You’re not going to beat the Toros with Rudi Stein on the mound.

Much like the successful, methodical networking at Ole Miss this season with friends and brothers of current players, Kelly brought in Carmen, and then the two immediately recruited interim fake coach, Old Man Who Cut the Grass at the Ballpark, to pass him off as the adult who would supposedly accompany them to the big game against the tobacco-spitting Texas goons.

It was another key Bears recruit in 1977, Kelly’s estranged dad Mike Leak, portrayed by William Devane, who would develop Carmen into a better pitcher. Even though he was brought in to coach, not as a player, late signee Mike Leak deserves credit and note for being a critical cog in the ’77 recruiting class—and for wearing an army jacket as coach of a team in the Astrodome.

This course of events paid off when it counted most, and the Toros dragged ass home with nothing to show but premature gum cancer and the earliest diagnosed cases of pediatric turf toe.

Who could blame Carmen for rolling with the Bears? They didn’t win the pennant in the regular season, but they were clearly a team on the rise. And who could resist signing with a team whose drive to Texas in somebody’s sister’s bitchin’ van was soundtracked by this classic theme song?

As was the outlook for the Bears in ’77, things are lookin’ good for Ole Miss on college football’s 2013 National Signing Day. And speaking of lookin’ good…