Last week, citizens of Clarksdale and blues travelers from all over were saddened to learn of the passing of Frank Ratliff, longtime proprietor of the Riverside Hotel, where many a bluesman had hung his hat. The loss of this beloved local legend, affectionately known as “Rat,” touched several students and faculty members of the Meek School of Journalism & New Media as well. I was one of them.

I found out about Rat’s death from Phillip Waller, a student in the Delta Project depth reporting class I co-teach with Bill Rose. He posted the news over the weekend on our class’s Facebook page, along with several photos of Rat taken on our spring break field trip to the Delta to research the region’s food traditions and habits for a magazine we are producing. They may very well be the last photographs of Rat ever taken.

Rat is not a cook, and the hotel does not serve food. But I made the case that even if a story on the Riverside Hotel didn’t really fit the food focus of this semester’s magazine, someone should at least pay a visit for some authentic Delta context. After all, Rat was one of the last of his kind, a member of that small fraternity of old-timers who remember the way it was and consider it a moral duty to preserve the old memories (and legends) of this distinct region.

I met Rat for the first time four years ago, soon after I set out to gather material for a food-oriented Delta guidebook, Eat Drink Delta: A Hungry Traveler’s Journey through the Soul of the South. My husband, Ralph Ellis, a North Carolinian who had never set foot in Mississippi, joined me for a long weekend that included an overnight stay in Clarksdale. I was a bit taken aback when we spotted this rundown structure in a seedy neighborhood behind a broken Schlitz sign. An elderly black gentleman opened the door and cordially welcomed us in. Immediately he put us at ease.

The Riverside is where famed blues songstress Bessie Smith died, following a car accident while on tour in 1937. At that time, the little brick lodge teetering over the Sunflower River was the G.T. Thomas Hospital, caring for black patients who had nowhere else to go for treatment.

In 1944, when Rat was four years old, his mother, Z.L. “Momma” Hill, took over the building and converted it into a hotel that became a temporary home to a long procession of black musicians. She treated them like her sons, cooking meals for them and sewing their costumes. Rat helped out his whole life, even while employed at the Wonder Bread bakery, and took over the business with his wife Joyce when his mother died. He reserved Room Number 2 as a shrine to Smith, with several portraits of her on the walls and one propped up lovingly on the pillow. Each of the other rooms paid homage to a different musician or other celebrity who had stayed there. Ike Turner. John Lee Hooker. John F. Kennedy, Jr.

Rat gave us the grand tour of each spotless, memorabilia-filled room, as if he were a museum tour guide. We settled on the Pop Staples room, equipped with a disco ball hanging from the ceiling. Before we left to explore the town, Rat invited us into his apartment to help us plan our itinerary and assured us he would make sure our stay was safe and comfortable. And it was.

Like others who have stayed there, by the time we left we felt like old friends. Ralph snapped my photo with Rat, posed in front of that iconic faded blue and white “Riverside Hotel, Home of the Delta Blues” sign, as a thousand other guests before me.

Right around the time of my book’s release, Meek School Dean Will Norton, one of my journalism professors more than 30 years ago, invited me back to my alma mater to help Bill Rose’s depth reporting class produce a special report on the Delta, as it has for the past three years. The hope was that the research I’d poured into my book could inspire students to delve deeper into more serious issues of economy and health.

In the classes leading up to spring break, Bill and I helped students lay the groundwork for stories on the catfish and prawn industry, obesity, the rise of community gardens, culinary entrepreneurs, and much more. Using the apartments above Ground Zero Blues Club in Clarksdale as our home base, we canvassed the region—talking to people, shooting photos, and eating extremely well.

One of the students in the photography class, Katie Williamson, was intrigued by Rat’s story and tried to set up a photo shoot with help from photography instructor Mikki Harris. They spoke with his daughter, Zelina “Zee” Ratliff, whom he had been grooming to take over the business. She said she would ask him but made no promises. He had been ailing and was reluctant to give tours to travelers who weren’t staying at the hotel, to respect the privacy of the guests. Still, I held out hope.

On the last day of our trip, they finally got word that he would agree to meet them late that afternoon.

When we arrived, Rat was sitting in his usual spot, in a plastic chair on the front porch. He did not stand up to greet us. He seemed exhausted. I wondered if perhaps he wasn’t up to our visit after all and whether Zee, who was inside, might ask us to leave.

Then Katie took the chair next to him, and deftly switched hats, from photographer to reporter. Phillip Waller pulled out his camera as Katie began chatting with Rat, eventually pulling out her pad and taking some notes of her own. 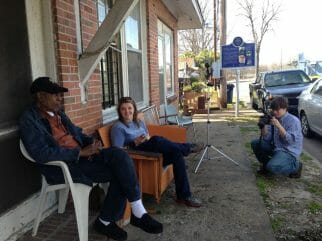 Slowly Rat began to perk up. In a voice so soft we had to lean in at times to hear him, he began telling us one story after another—some of which I recalled from my earlier visit—while Phillip photographed him. Zee joined into the conversation as well and gave us a quick tour of the storied rooms.

As we prepared to leave, I showed him my book, and the passage in which he was quoted. A weak smile appeared on his thin, drawn face. I signed it to him and his daughter. He asked me where my husband was and said he hoped we’d both come back to stay sometime.

Frank “Rat” Ratliff died at the Riverside on the evening of March 28, 2013, less than two weeks after our visit. For now, the hotel appears in good hands. Like her dad, Zee seems to genuinely relish sharing her family history and Clarksdale heritage with those who care enough to inquire.

That’s a good thing; Rat told the students that there’s so much family history within the hotel he’d rather have it torn down than let anyone other than a blood relative take over.

Whatever the Riverside’s ultimate fate, the stories within it will live on—thanks to journalists who have come to listen—and lean in close, if necessary, to hear the answers.