By the Numbers: Ole Miss and Memphis Show a lot of Offensive Fireworks

On Saturday, the No. 10 Ole Miss Rebels host the Memphis Tigers in the battle of Interstate 55. This weekend’s game will showcase the explosive fire power in both offenses as the Rebels and the Tigers have put up 132 and 134 points respectively over three games. Let’s quickly delve into each quarterback who will act as the surgeon on the field cutting up the defense. First, looking at Ole Miss gunslinger Bo Wallace, who is 100 precent healthy in his senior campaign and also has run coach Hugh Freeze’s offense for three seasons now in Oxford.
After the 56-15 victory for the Rebels over Louisiana-Lafayette, Wallace had thrown for 1,023 yards on 71 completions to 94 attempts for nine touchdowns on four interceptions. His completion rating came out to be 75.5 precent, leading the nation.
Wallace has been able to put the first half hiccup against Boise State behind him and move forward each game, and his receiving corps has been there at the right time for him. The talented group of wideouts is led by junior Cody Core, who has snagged four touchdowns on the young season.
The Rebel offense will have to stop a talented linebacker from Memphis as Tank Jakes might cause some havoc to Wallace and the Ole Miss O-line. In just his fifth ever start against Middle Tennessee State University, the senior recorded two sacks, including one that went for a safety, and snagged a interception.
Memphis’ coach Justin Fuente has a talented red-shirt sophomore quarterback in Paxton Lynch, who has thrown for a total of 766 yards and 5 touchdowns on the season. 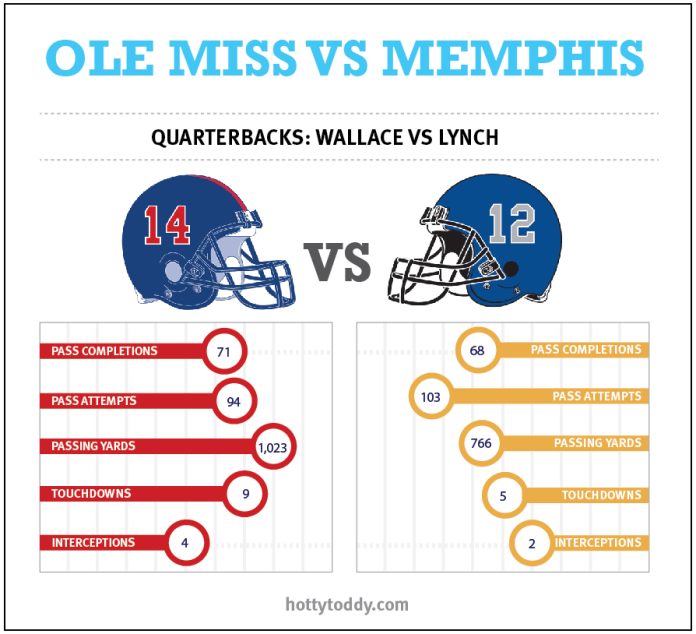 Even though the Tigers put the ball in the air, they also work a lot on the ground game with Doroland Dorceus carrying the ball for a total of 220 total yards for an average of 5.7 yards a carry, and four touches went for touchdowns. Dorcues longest gain was for 40 yards.
The Ole Miss defense led by C.J. Johnson, sophomore Robert Nkemdiche and sixth-year Deterrian Shackelford should really be prepared for the run or the pass.
With all of the emotion of what Saturday will bring as Ole Miss will honor “Chucky Mullins and his number 38” their might be a lot of points scored in this game, but as the game gets into the fourth quarter the Rebels should have the game in hand.
Adam Brown is sports editor for HottyToddy.com and can be reached at adam.brown@hottytoddy.com. Amelia Camurati is managing editor and can be reached at amelia.camurati@hottytoddy.com.