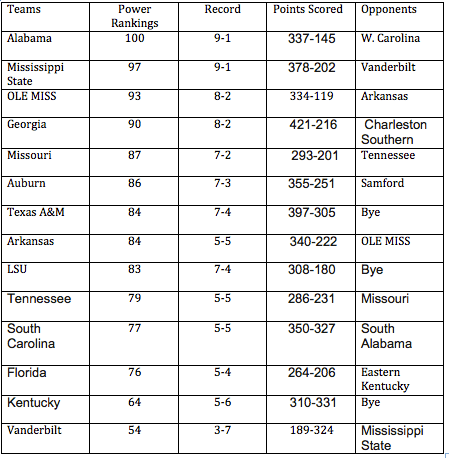 What a weekend! We all know now three things:
A. Who isn’t going to win the Heisman Trophy,
B. Who probably is going to win the west, and
C. Who all will be looking for a new coach!
Do I need to supply the answers? I didn’t think so.
To start off with, LSU confirmed Mardi-Gras is not a cold weather event as one of their worst outings in years transpired in Fayetteville. What an embarrassment! Get ready for the Independence Bowl Tiger fans. On the other hand the Hogs played with conviction and will be a formidable opponent for the Rebs come Saturday. We better be ready for 60 minutes of H…make that frostbite. Looking forward to the winner of the west, the Egg Bowl only matters should Bama lose to Auburn, an unlikely scenario after Auburn’s “stink bomb” in Athens. However, major bowl considerations are on the line for both teams if the Rebs can prevail at Arkansas.
Let’s talk about the Maroon Bulldogs for a second. True they only lost by 5, but truer they were never really in the game trailing 19-0 on the road before they got in gear. State’s new “T” word for Titanic is spelled TUSCALOOSA. Let’s hope the Rebs can finish them off.
The east is still a two team race with Missouri controlling their future, needing 2 wins. Georgia must sit and wait and still has nonconference Georgia Tech as a challenge. There should be a number of coaching changes on the horizon following this season.
If you watched the SC-Florida game, one had to feel saddened for the Gator fans watching the ending to that fiasco. Here’s my Top Four for Most Pathetic Performances for Week 12:
1. Auburn
2. LSU
3. Florida
4. Kentucky
In conclusion, the Final Four looks like Bama/FSU/Oregon/TCU currently with possibly one change before it’s official. We need to be hopeful, but also realistic. If we can finish 11-2 winning a major bowl in the process and then having another great recruiting year, Hugh Freeze can borrow a line from The Carpenters “On Top of the World” as we all can!